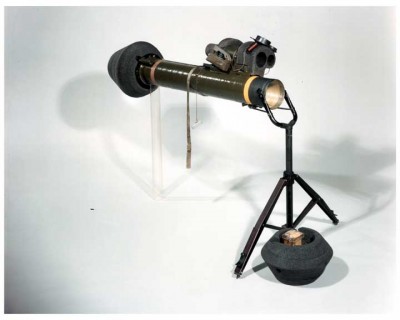 URL : https://www.valka.cz/USA-M47-Dragon-t20571#77843Version : 0
Siegfried MOD 17 years ago
Country of origin : USA
Introduced into the armament of the : 1975
Weight : 14.57 kg with a daily sight, 21.29 kg with night sight
Length : 1,154 mm
Diameter : 292 mm (meant in the widest point)
Caliber : 127 mm
The minimum length of firing : 65 m
The maximum length of firing : 1,000 m flight time 11.2 s (the average speed of 90m/s)
The daily sight of the SU-36/P
Weight : 3.10 kg
Length : 196 mm
Field of view : 6°
Magnification : 6x
Night sight AN/TAS-5
Weight : at 9.82 kg
Length : 368 mm
Field of view : 3.4° - 6.8°
Magnification : 4 x
Lafeta M175
Weight : 37.6 kg.
URL : https://www.valka.cz/USA-M47-Dragon-t20571#77849Version : 0
bitaxe 17 years ago
Description
Regards pancéřovku designed to fight resistant targets such as armored vehicles, concrete bunkers or zodolněné dřevozemní shelters. It comes to a weapon supported by one man, with the possibility of a hit from the shoulder or from the carriage (either standing on the ground or carried on the vehicle). In the case of the firing of the carriage is this carried by the second member of the team. Pancéřovka is supplied with day and night sight and its is also a part of the charged shot. A daily sight is used in the case of good visibility, in the case of fog, smoke or otherwise reduced line of sight is used the sight of the night.
The gun has replaced the anti-tank missile Javelin.
The weapon is unloaded and secured in the factory, the drain tube also serves as a storage and transport case. The drain of the device is of glass laminate with a smooth "bores", its part is in addition to the missiles as well as batteries for the sight and control of missiles and the conductor whereby the missile is controlled. Furthermore, it is his part of the shock absorber recoil (is divided into front and rear).

In 1964 he was the Mc Donel Douglas Astronautic company specified the development of anti-tank weapons, medium range ( MAW ), in order to replace in this task used 90mm bezzákluzový cannon M67. The development of weapons was terminated after 8 years - in 1972.

Addressing the role of the actual time, as well as the MILAN, TOW and Bassoon was used a laminate rocket pods/container with the rak engine, semi-automatic guidance (SACLOS), which saw a deviation of tracers from the axis and were passed on to management after the cable odvíjeném from the coil in the rocket rotating around the longitudinal axis 5 rev/s. Groundbreaking was the use of 60 pcs impulse of rocket motors with a thrust of 1200 N for a period of 18 ms používajícich a two-component TPH Nc/Ng HEN-12 in the form of 1 mm nascent tape. It is interesting that this solved the impulse of the RM on the TPH with success used in dozens of applications the teacher "missile department" VAAZ in Brno. Rocket bikes have been fired in opposite pairs, each two turns - after approximately 400 ms, the required thrust vector is docilovalo precise timing of firing events depending on the deviation of the rocket, data about the angular position of the gyroscope and the position of the rocket motors, which are in line for use. The bikes are inclined in the backward direction, in result the rocket gradually accelerating from 80 m/s at výmetu of the rocket pods on the end of about 110 m/s.
Due to the used concept, it was possible to carry out modification and changes in each other výrobná series of missiles, so the data of different series differs and the length of the rocket and its mass are increasing.

Electro-optical homing device Kollsman SU-36/P /"tracker"/ excel the simplicity and compact construction. In the aluminum shell zastříklé to the polyurethane foam located optical sight, an infrared tracker tracers the rockets and the electronics board. Sight 6x50 with the Abbot prism has a magnification of 6x and the field of view of 6°. The design of the infrared goniometer "tracker" is as a model of simplicity and wit presented in many textbooks of infrared techniques, make do with a single concave mirror claimed in nutačního movement elektromotorkem and čtyřkvadrantovou photodiode through which the image of the tracers orbits.
The homing device has a weight of 3.1 kg and is battery-powered rocket pods or trainer.

Night sight Phillips AN/TAS-5 with cooled imaging (field of view of 3.4 x 6.8°) is an additional device to the SU-36/P, but its equivalent, must therefore contain the same tracker, for the operation needs its own battery and pressure bottle. The weight of the device is 9.8 kg, with one battery and pressure. bottles.

With advancing motorization units of the army resigned on the weight of the ensemble of 14.6 kg and the portability of one soldier, the new rockets have lifted the weight about 2 kg, night scope for the next 10 kg, therefore, was introduced by the installation of the RPM M113 or lafetu M3 machine gun .50 BMG M2 with the name of M 175 Mounting Assembly ( weight of 37.6 kg ! ). With its use to facilitate and guidance of an ensemble on target, and his operation grew closer with ensembles TOW and others. 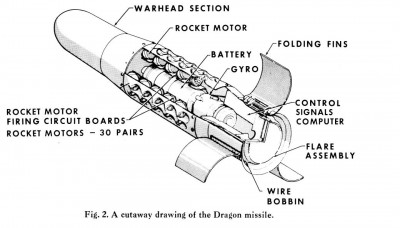 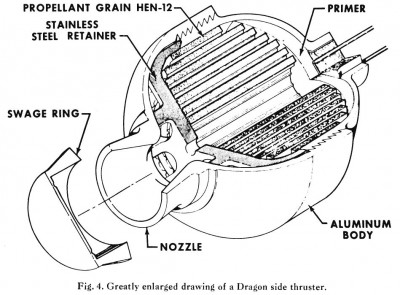 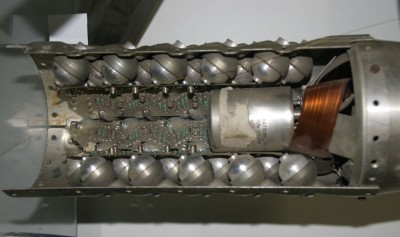 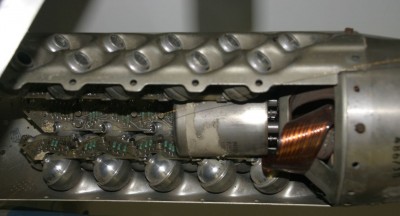 Night sight AN/TAS-5
To the front is a removable battery, in the middle of the bottle with the gas for cooling the sensors, both for 2 hours running. On the right side in line with the daily sight is the same infrared goniometer, which is activated only during launch and powered from the pyrotechnicky activated battery on raketnici.

Mounting set M175
substantially simplified guide spotters against the original state, when the shooter making the gun moves to the shoulder, and has only a telescopic dvounožkou. 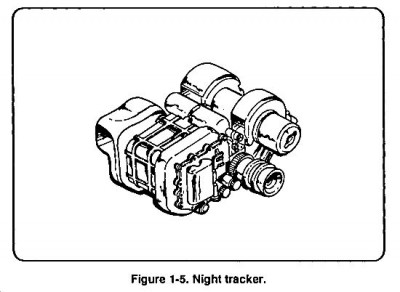 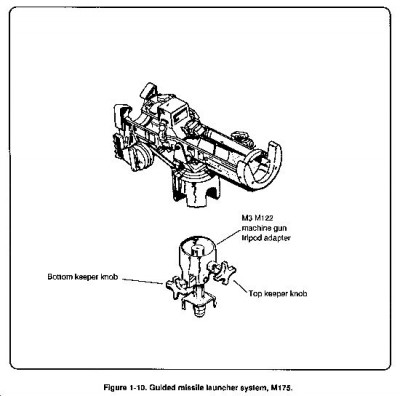 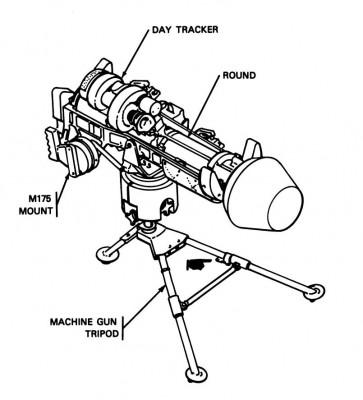 The efficiency of the Dragon system is dependent on the level of training of the shooters, because part of the system was well thought-out set of training aids, /Fig. DragTr / which consisted of :

- M57 Field Handling Trainer - teaching model for practicing marching, getting on the vehicles and other "kvérgrify"

- M54 - Launch Efect Trainer (YEARS ago), a mock-up container of the rocket, to which was attached the actual guidance elektroptické device SU-36/P or night, AN/TAS-5. In the YEARS were the circuits simulating the delay in the start of the batteries and the gyro rockets and using blind bullets M64 /for rifle grenade/ was imitated the noise and move the fuel in a rocket launch

- AN-TSQ-1 Monitoring set, suitcase with electronic and display elements, which connect on the day or night tracker, feed him out of your battery. The instructor was showing with the error is the scorer of the observed IR transmitter M89 and whether he hit the target on the specified dimensions.

- M89 IR Transmitter, the transmitter infračerverveného radiation corresponding to the stopovce missiles on the target, including upevńovacího the frame and battery, it can be mounted on any vehicle or other object.

So it was possible to relatively cheaply, in the real terrain and in actual climatic conditions tréhovat launch and guide missiles to the target. The system was criticised, that the FLIGHT does not generate a sufficiently realistic conditions - swing of the rocket pods and the dust formation during the shot, because it was designed LES Launch Environment Simulator. Into the FOREST into the bath was a mixture of gases MAPP/ oxygen, which after firing clean two plastic caps (of course, biodegradable), burned mixture in addition to the noise conducted and the required dust formation and oblique attachment at the end of the rocket pods and jerk downward. / Fig. DragLES /


With the introduction of the assembly kit M175 and the advent of personnel computers originated trainer DGT - Dragon Gunnery Trainer designed exclusively for the classroom. The model proposed is placed a projector driven by a PC, whose image follows the shooter in the mirror, the instructor has a monitor on which he sees the success of the guide, choose a variety of computer-generated terrains, the numbers of targets and the like. On floppy disks, was shipped 30 "standard situations", videos and the like. When training is not opotřebováván the actual sight as in the original training set.


Elements developed by DFTT (Dragon Field Tactical Trainer ) currently used in the laser system of MILES, which allows the confrontation with the other stations (soldiers, weapons systems) and signal their elimination or, on the contrary, that the Dragon system was eliminated earlier than fulfilled his task.

In the picture /DragK1/ is field control station AN/TSM-114 with IR collimator, which appeared already with the prototype in 1972.
From the year 1977 comes and Dragon Maitenance Set AN/TSM-128, which consists of parts of the DMS-D DMS-G. That the control equipment operates an incomplete impression will not be a coincidence - the control equipment is located in one of the air-conditioned pikapu with a control device for the TOW, and it can be assumed that part of the equipment such as oscilloscopes, bottles with nitrogen, and the like are common. Whereas, in 1977 there was a merger of design agencies for projects of TOW and Dragon at fy. Raytheon, it would be advantageous for the manufacturer and the army. 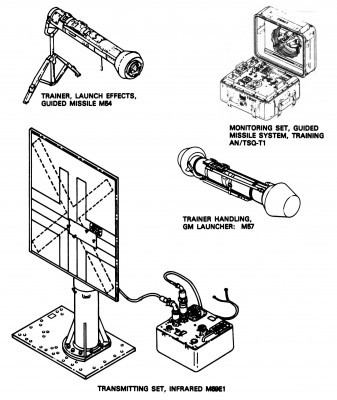 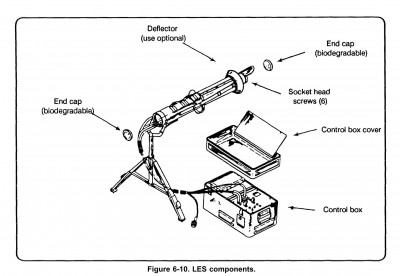 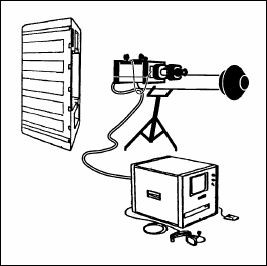 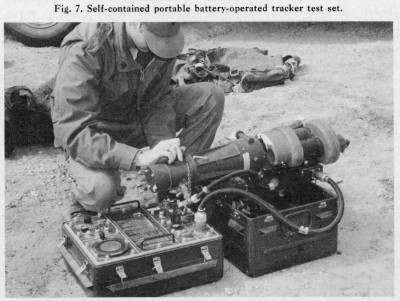 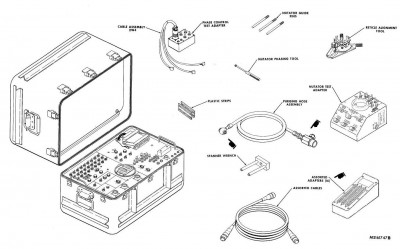