Heroine of the Soviet union - "pioněrka"

She was born 20. February, 1926 in Leningrad, where she ended a ten-year school. Her father and mother worked in the Kirovském race. In June 1941 she traveled on summer vacations together with her younger sister Galya to your grandmother in the village By the district of Vitebsk. On the train, not far from the objectives of on - station in Obolsku, it caught war.

Zina didn't leave with the other refugees, but to join the komsomol underground organization "Young avengers" in Obolsku, led by komsomolkou E. With. Zeňkovou. Together with them in the spring of 1942 participated in diverse actions against the railroad, power plant and warehouse of flax. Then was mandated to have penetrated into the German officers ' mess, where disguised as a waitress poisoned rat poison lunch and tossing out so the whole staff of the local German garrison. Occupiers, in response to this act started in the city of terror and an illegal organization "Young avengers" could be dispersed. Zině succeeded in the August 1943 escape to the partisans. Through the training, embraced the trophy German submachine gun and became rozvědčicí partisan section. Already in less than a month since its arrival to the partisans participated in the first combat action. During the liquidation of the local German crew kosila fire from the submachine gun confused the Germans after them partisans of her group burned down the barracks and blew up the weapons depot. The commander suggested-Zine for proven courage in battle to the Order of the Red star. Even when several other events, which she attended during October and November its a submachine gun not idle.

In December 1943 she received from the commander of the task of trying to establish a connection with the surviving members of the organization "Young avengers" in Obolsku. Zina went into the city unarmed and on giving someone local was detained on the return journey gestapo and presented at local exam room. During the questioning she was able to in the unguarded moment, take from the table a gun and then shoot two gestapáky in the room. After jumping through a window to the courtyard, where a precise shot passed the guard and ran towards the river. There should wait the other members of the group. It was, however, hit in the leg and haunted by his pursuers. It was taken on the main exam room of the gestapo in Vitebsk, where she was subjected to torture to reveal the members of the organization "Young avengers", who is still hiding in the Obolsku. Zina, however, was silent and refused to communicate. When one transfer on the interrogation unsuccessfully tried to commit suicide by jumping under the truck. Despite all the efforts of the gestapo failed to the girl break, and she was 13. January 1944 executed.

Zina Portnova after the war became the concept of, her name was spoken with reverence. Was given as a model of soviet pioneers, who after her naming of your organization and its portraits decorated their school, she was devoted to articles, books, and consisted of her verses. 1. July 1958 was Zině Portnové degree the title of Hero of the soviet union im memoriam as the heroine – "pioněrce". The problem was that Zina had already in 1943 she entered into the [i:de9d5744cb]the Komsomol[/i:de9d5744cb], and yet, that was in the partisan section of the youngest, at the time of her death she was almost eighteen years old. It was for years zamlčováno, so as not to disturb pioneering legend.

In Russia and Belarus is after her named many of the streets. By the highway between the cities of Vitebskem and Opolskem stands her monument, and one of the ships of the Russian commercial maritime fleet still bears her name.. 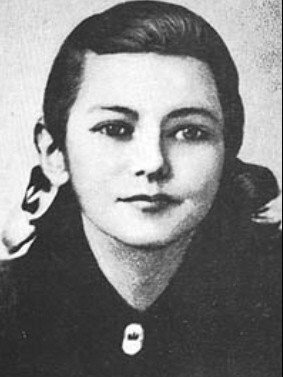