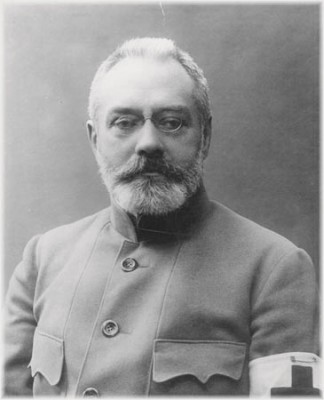 He was born in 1862 in Moscow, while studying at the 2. moscow high school he wanted to as a volunteer in the russo-Turkish war (the liberation of Bulgaria). After high school he graduated from historical-philosophical faculty of the moscow university (1886)with placements Berlin, Vienna and Heidelberg.
1886 he joined in the courts of magistrates in Moscow.
1895 spoječně with his brother Fyodor made a spy route around the Turkish crews.
1897 entered the Russian army, 1898 posted to the Far east to protect the construction ruskočínské railway. 1899 released for contempt of a civil engineer, after which challenged him to a duel. On the way back into european Russia with the brother drove through China, Mongolia and Central Asia. Then as a volunteer volunteer in the boer army (volunteers from Russia were mostly motivating the revenge of the English for the defeat in the Crimean war). in the fighting in South Africa he was wounded and fell into british captivity.
1901 he was appointed director of the moscow banks. Financial speculation moved up to the head of the insurance company.
In 1903 he traveled to Macedonia to participate in the protitureckého uprising.
at the time of the russo-japanese war, he served as the representative of the Russian red cross on the battlefield. After the battle of Mukden fell into captivity when he refused to leave the wounded with the retreating Russian army, and remained with them in the city.
After the release of after the return is based side of the Movement 17. October - known as Okťabristé. Becoming a member of the Duma and in the years 1910-1911 by the president.
1908 challenged to a duel the leader of the party of cadets P.N.Miljukova for accuse me of lying, witnesses have finally achieved a reconciliation.
1909 was a struggle with a member of the economic chamber of the earl And.And.Uvarovym, the fight ended with injury Uvarova.
1912 was a duel with a lieutenant colonel With.N.Mjasojedovem
Just before the first world war Gočkovovi fell into the hands of several letters - among them the leaf of the empress - addressed to G.J.Rasputin, making him discredited in the eyes of the tsar.
During the war he served at the front as the trustee of the Russian red cross. 1915-17, he worked in the forefront of the sort of military-grade commission - the organization, created by industrial magnates, for the purpose of supplying the army. In 1915 he founded the Gučkov Progressive bloc, a coalition with the Constitutional democrats. In 1916 he began together with the independent industrialist Mikhail Tereščenkem and Cadet Nikolai Někrasovem to convince the tsar to give up.
For the February revolution of 1917 he was the head of the temporary commission which took over the ministry of war. 2.3.1917 in Pskov participated in the abdication of Nikolai II. from the throne. He became minister of war and navy in the Provisional government, but instead on the refurmu army focused on cleansing, which ultimately led to the resignation in April 1917. The official reason was nepotlačení anarchy in the army.
Having lived in Kyslovodsku, he was hiding from the bolsheviks and agitated for White and financially supported them. Did political advisor And.Also. Děnikonovi. He then sent his special envoy to Europe.
in emigration he lived in France, dies after illness in February 1936