The arrival of the first combat aircraft did not immediately cause changes in the established schemes of naval warfare. During World War I, aircraft over the sea could hardly pose a more serious threat to warships.

However, already in the following World War II, sailors had to cope with a qualitatively changing situation. Aircraft, taking part in combat operations in the 1940s, could effectively fight virtually all classes of warships.

The next decade posed a difficult choice for the fleets of all the countries of the world - either the ships would be able to repel air attacks, or they would have to descend from their pedestal of independent combat power. Therefore, in the 1950s, the strongest fleet in the world ( especially the USA and Great Britain) diligently studied the possibility of equipping battleships with many different PL means, including PLŘS.

In the USA, work on the first Lark fleet began in 1945 and its basic destiny was to protect battleships from aircraft controlled by kamikaze pilots. However, the war ended before work on the Lark system could be completed, but the project was not stopped. In 1950, Lark became the first missile of this class to destroy a real air target and was approved for acceptance into service. However, due to its liquid rocket engine running on aniline and nitric acid, Lark was virtually not used on battleships. Nevertheless, it played an important role in the training of operators and the further development of maritime missiles.

His successors became significantly more technically and operationally advanced missiles Tartar, Terrier and Talos. At first, however, it was a problem to choose a suitable ship. In the end, the cruisers seemed the most suitable, because the smaller missile systems at the time would not fit on smaller ships at all. However, the existing ships required extensive rebuilding.

At that time, it was also necessary to overcome the first crisis, as it turned out that the great labor and cost of reconstruction is difficult to defend due to the low efficiency of the first models of these new weapon systems. However, the first test shots of the Terrier rocket in 1950-51 quickly proved the correctness of the concept. According to experts, a volley of two of these missiles had the same probability of destroying the target as 7,000 grenades caliber 127 mm, which, however, had a smaller effective range. During large military tests in 1954-57, over 350 missiles were fired with 80% of hits. So the development went in the right direction.

In the USSR, work on the construction of a naval PLRK went a different way. Already in the early 50s, the Minister of the Navy N. G. Kuznetsov submitted several times to the Prime Minister of the USSR J. V. Stalin a report on the delay of the technical level of the Soviet navy to major Western naval powers, especially in the field of missile technology, including naval PLRK. However, it has not yet been possible to reach a discussion on this issue at the governmental level. It was not until the mid-1950s that the new Commander-in-Chief of the USSR Navy, S. G. Gorškov, issued a decision to arm Soviet warships with anti-aircraft missiles. Work on the creation of the first Soviet naval PLRK began with a decision of the government on 13 August 1955 by decree "On the protection of naval ships from the air force."

Based on this regulation, the design office CKB-16 proceeded to the elaboration of technical design No. 70 ( chief designer K. I. Troškov) - conversion of a light cruiser type 68bis into a PVO ship. It was assumed to replace all turrets with 152 mm cannons of the ship with four double launch pads (OR) anti-aircraft missile complex middle range, constructed on the basis of the complex S-75, then widespread in the state air defense.

The derived project 70E envisaged the redesign of one 68bis class cruiser so that in the third quarter of 1957 this ship could be equipped with an experimental model of the S-75 complex, modified by naval conditions and designated by the Navy as M-2 Volkhov-M, for testing.

The M-2 complex was designed for anti-aircraft defense of the ship against attacking bombers and aircraft missiles. It was planned to use the V-753 rocket based on the V-750 rocket as a means of fire, and the elaboration of its design was entrusted to a design office later known as MKB Fakel. P. D. Grušin was appointed chief designer.

The completion of the complex itself, modified according to the requirements of the Navy, was carried out by the offices NII-1, NII-49, CKB-34, while the work was supervised by the main designers S. T. Zajcev, P. D. Grušin, A. S. Grinštejn and E. G. Rudjak.

Within the main structural units of the new weapon system, the complex included the control system "Korvet-Sevan", a stabilized launcher equipped with an automatic feeder and charger for SM-64 missiles and 10 13DM missiles (V-753) located below deck. The 13D missiles were modified for use on the new OR SM-64 ( missiles were hung under the guide rails instead of lying on top of them, as in the ground version), taking into account the specifics of naval conditions as well as ensuring fire safety during permanent storage below deck with constant filling with one of the fuel components (fuel).

The main external difference from the ground version of the S-75 became the new launcher. Processing of the first naval launch pad type SM-64 was started on October 7, 1956 in CKB-34 ( chief designer E. G. Rudjak). It was a double gyroscopically stabilized launcher, equipped with a rocket feeder and charging system. The firing range was to be 44 missiles assemblable on the ship.

According to the regulations, the date of completion of the initial project M-2 was set for February 1957, while the production of experimental models of missiles was planned for the end of 1957.

Another improvement of the M-2 system was to be PLRK M-2bis, which was expected to use V-755 missiles, but modified according to naval requirements. However, already in the early stages of the design work of the original project, this question was reopened several times, and finally in August 1957 it was decided to cut all work on various variants of the M-2 and adapt for the M-2 only one ship to receive the status of an experimental ship.

A light cruiser Dzerzhinsky was set aside for this purpose by the navy for preliminary inspections and possible modifications of the experimental model of the M-2 complex in naval conditions. This ship was built in December 1948 in the company No. 444 in Nikolaev, in its original form with artillery armament was accepted into service in 1952. Its modifications for the installation of the M-2 system, which were to end in September 1956, led by S. T. Zajcev.

The ship was equipped with a new PLRK M-2 in Sevastopol from June 1957 to September 1958. The project involved the dismantling of the third MK-5bis turret with 152 mm cannons, the stabilized OR installed in its place and the ammunition depot of this tower to rocket depot.

In addition to the removal of the third turret, the stern command-rangefinder station, eight 37 mm V-11 cannons on the stern superstructure, torpedo equipment and parts of the ship's original radar equipment were also removed from the cruiser.

The adaptation of the missile warehouse proved difficult. Due to their large size, the space of the original artillery depot of the third turret proved to be insufficient. Therefore, it was necessary to cut a hole through the three decks and still build a special superstructure of the warehouse with a height of 3.3 meters on the upper deck. The roof and walls of this superstructure formed armor plates with a thickness of 20 mm. Ten missiles were placed vertically in the warehouse - eight on two special rotating cylinders ( four missiles on each), two missiles were out of the cylinders and were designed to replenish missiles on the cylinders.

Reconstruction of the light cruiser Dzerzhinsky according to the design of 70E was completed and the ship was ready for testing at the end of 1958 - in October conducted tests grounded, in November sailed on a test voyage and in December began flight and design tests of the M-2 test model.

During these tests, the first sharp launch of the V-753 rocket was performed, the functionality of the launch pad and rocket feeder from the warehouse, the safety of ship superstructures during launch, the procedure of filling rockets with fuel and the operation of control and guidance systems "Sevan" when firing on towing targets. During 1959, about 20 missile launches were made, including shooting at air targets. The first real target for the M-2 was a remote-controlled bomber Il-28 flying at a height of 10 km, which was shot down by the first missile, which impressed skeptical sailors.

However, not everything went according to plan. For example, as the required special system of automatic rocket refueling could not be constructed directly at the OR, a backup system of manual rocket refueling was created at the bottom of the storage below deck before being sent to the OR. This technical solution did not meet the requirements of fire safety, however, at that time, the designers could not solve the problem otherwise.

The evaluation of the results of the M-2 tests in the years 1959-60 stated that the complex mostly met the prescribed requirements, but at the same time a number of shortcomings of the new weapon were listed. Above all, the M-2 is too heavy and bulky, even for such ships as Dzerzhinsky. Another factor limiting the possibilities of the complex was the small rate of fire, given the large time intervals needed to reload the launcher and also the small firing diameter of the missiles. In addition, the use of rockets with two high-flammability liquid fuel components greatly increased the risk of fire and explosion.

However, due to the experimental nature of the M-2 system, the shortcomings were not classified as "critical", which would prevent its further service. The cruiser could therefore continue to be used as a floating "training facility", where the operators of future naval PLRKs gained their first experience.

On August 3, 1961, after the end of the M-2 test program, Dzerzhinsky was therefore reclassified as a school cruiser. In this role he completed several dozen long-distance voyages - to Romania, Bulgaria, Turkey, Syria, Egypt, Greece, France and Tunisia. However, in the summer of 1967 and in the autumn of 1973, despite his transfer to the category of school ships, he was deployed in the Mediterranean Sea in a war zone, where he served in military assistance to the Egyptian armed forces during the Six Day and Yom Kippur War.

After the end of the Arab-Israeli wars, the cruiser returned to its school activities, in which it remained for almost another 10 years. At that time, however, its missile system was already obsolete morally and technically - the last technical inspection of the PLRK on Dzeržinský was carried out in 1982, all missiles leaked propellants and were not combat-ready. On October 12, 1988, the cruiser was disarmed and removed from the Navy.

Thus ended the service of the first Soviet ship, armed with anti-aircraft guided missiles. At that time, the ships of the Soviet Navy were already equipped with PLRK large, medium and short range, to repel the attacks of any means of air attack - aircraft, wing missiles, anti-ship missiles and other various types of precision air ammunition. But undoubtedly, the first experience gained during the development, testing and operation of the M-2 experimental missile complex played a crucial role in their development.

Basic tactical and technical data of the M-2 complex: 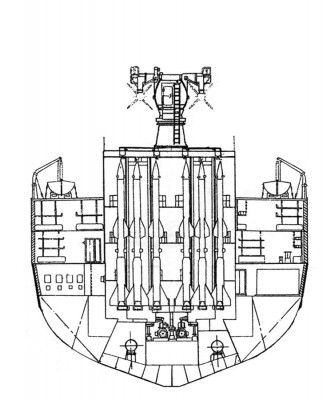 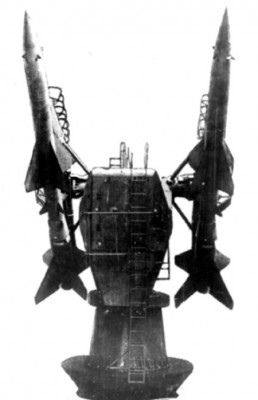 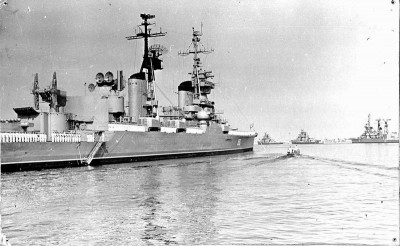