In 1947, 1. Department of the General Staff set requirements for the development of a new half-belt infantry transporter of mass category 3 tons. The vehicle was based on German construction Sd.Kfz.251 (in Czechoslovak use referred to ako HKL6p). As part of the typing, a half-track artillery tractor in the weight category of 3 tons was to be created on the same platform.
According to the original requirement, the vehicle was to be powered by a diesel engine (probably type V 966 with an output of 105 hp at 2200 rpm). In a short time, however, the requirement for a petrol engine Tatra T-902 (110 hp) has changed. In contrast to the HKL6p, from which it was based, it was to have a driven and front axle (from the developed 1.5 t truck of the AZNP company). The body was to have a box shape similar to the American transporter M3 (in Czechoslovak use referred to as OT Internacionál), they should have been firing at her sides. Similar to the OT International, a 12.7 mm machine gun was to be mounted in the middle. The transporter was to carry 12 people with weapons and equipment and had to tighten the lift to a weight of 4 tons.

Originally, the design and development of the vehicle was to be provided by VTÚ (Military Technical Institute), but due to insufficient personnel capacity, the project was entrusted to the company Škoda Plzeň. The first development proposals began in 1948.
On February 24, 1950, the army again changed the requirement for the engine. It was to become a diesel 8-cylinder Tatra T-108 (140 hp). In the description of the new armored personnel carrier, the technical documentation 83-682č-310550 of the Škoda company states some characteristics of this project. Due to the size of the engine, it was not possible to secure the front axle drive. The maximum speed reached was calculated at 68 km/h. The vehicle was to carry 12 people and 1000 kg of material, it had to tighten 4 tons in the tow, with a maximum possible pull of up to 7 tons, the maximum speed was 3 km/h. The vehicle was to have a winch in the frame with a pull of 3 tons and a 50 meter long tow rope. The gearbox was to consist of Praga-Wilson, hydraulic clutches were from Praga. The appearance of the vehicle was drawn on drawing 1Am639-P from 1.6.1950 (under the name Wheeled combat vehicle 3t with T.108 engine).
At a meeting at the VTÚ in 7/1950, the proposals of this armored personnel carrier were also discussed. Due to several written mentions, a version with a T-902 petrol engine was also in play. However, this proposal was probably rejected at the meeting. In the design with a T-108 diesel engine, the installation of a winch was canceled, resp. the possibility of retrofitting a winch with a pull of 2 tons was discussed. The defensive armament was also changed, when the requirement to mount a 12.7 mm machine gun changed to mount a machine gun vz.37, which could be used against ground and air targets. The carriage was to be located approximately in the middle of the vehicle's transport space. At the same time, the transporter was to have the front shield of the machine gun as the HKL6p transporter. It is probable that another machine gun should have been mounted in it. Another requirement was the mortar to be mounted. It was solved without any problems. The project bore the code No. 3012.

The final project was submitted for approval on August 8, 1951. At that time, the project was renamed KOBO-3. Work on the production of the prototype had already begun at that time, the plan envisaged completion on April 1, 1952, later the deadline was postponed to December 31, 1952.
The prototype/functional pattern made of unarmoured steel was completed on January 15, 1952. During the tests, a maximum speed of 43 km/h was measured, which was insufficient than expected. Subsequently, there was to build an armored body for the second prototype. However, the sources do not confirm whether these works on the second prototype were completed, it is possible that the second prototype was completed in the form of artillery tractor. The first prototype underwent tests that revealed a number of unfavorable design errors.The vehicle was overloaded, had problems with driving characteristics and the steering itself. The planned specifications were not met and therefore the project was canceled in 4/1952.
The prototype of unarmored steel was taken over on April 15, 1952. Some sources claim that the armored prototype was taken over on December 1, 1952. In the photographs, the prototype bears the registration number 522266.
The requirements of the army were then fulfilled in a similar project, which was OT-810. 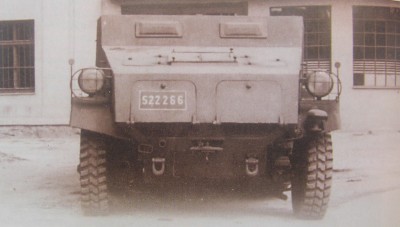