URL : https://www.valka.cz/Pevnost-Trient-t124908#424883Version : 0
Karel Oktábec MOD 9 years ago
the Construction of the fortress of Trient

In the 60's. years of the 19th. century, when after the loss of the Veneto have become the austrian South Tyrol border provinces, it was decided to transform the Trientu in military strength. In the beginning of the 20th. the century was because around the city built a ring of stone forts, which should, if necessary, to block the valley, which were important to communication. This time, however, the range and effectiveness of artillery increased (due to the introduction of steel grooved main and smokeless gunpowder) so much so that even the newest of these forts were basically outdated already on the day of its completion. In addition, there is the danger that due to the changes to which the beginning of the 20th. century occurred in the area of training and tactics of infantry, a potential attacker will recall the famous phrase of the prince de Ligne (1735-1814), that "... the army passes everywhere, which way went the goat...", avoids sophisticated údolním closures and through the unprotected mountain ridges will penetrate directly into the center of trientské strength.

First, you probably realised this fact the director of fortification works in the Trientu colonel Ing. Ernst Friedl (1862-1938), whose command was in 1909, construction began on the new retaining points Top and the Lower Palon, lying in the southern part of the massif of Monte Bondone, at an altitude of around 2000 meters.

Friedlovým successor in the post was from 1910 colonel Ing. Anton Schiesser (1863-1926), responsible for inter alia the construction of new strength caps Folgaria and Lavarone, whose modern concrete forts to protect the approaches to Trientu from the south-east. In the Trientu put near the fulcrum of the Palon set up yet kavernovou battery Palé.

In 1914 he took the position of director of fortification works in the Trientu colonel Ing. Franz Seraphin Edler von Steinhart (1865-1949), a civil engineer with twenty years of practice in the field of fortification engineering. Under his leadership, built the austro-Hungarian sappers in the year 1915 in the mountains around Trientu ring of new fortifications, which made him a virtually impregnable fortress. Mountain peaks and ridges were provrtány miles of trenches, underground tunnels, ammunition depots and artillery caverns, into which was moved the armament of the old conditions of modern warfare substandard forts. To strengthen this new position and construction of objects for rotating armored turrets were in abundance used construction novelty of the time – reinforced concrete. Supply, martial status and underground shelters (which could, if necessary, to accommodate the soldiers of the two full divisions) was provided by the networks of the new mountain roads and cable cars.

According to the time of its inception to the elements of the fortification system divides the objects 1. generation (built around the end of the 19th. century) and 2. generation (built in the twentieth century). According to the design it can be (using today's terminology) divided into fortresses, forts, artillery forts (battery), infantry log cabins and open or covered battery of artillery.

Fortress (Festung) was a separate complex of above-ground and underground facilities (forts, blockhouses and batteries), characterized by high resistance. Above ground, the infantry and the artillery emplacements were positioned in reinforced concrete bunkers, underground artillery of habitat in the corridors of interconnected caverns, where appropriate, in a revolving armoured towers associated with underground vertical shafts. The whole complex, part of which was also the position of anti-aircraft artillery, underground shelters, ammunition depots, etc., was protected by a missile trenches and wire obstacles. A fort, named according to their geographical location, it was around Trientu six. On the west side it was easier to Monte Cornetto and Monte Palon, on the more vulnerable eastern section of the extensive fortified complexes of Monte Calisio, Monte Celva, Monte Chegul and Massiv Marzola. All were built around 1900 and belonged to the 2. generation trientských objects.

Fort (Werk), an artillery fort (Battery) and the cabin (Blockhaus), the objects were derived in part from 1. generation (here were all of stone construction and earth-moving artillery batteries of the original this kind of fortification ring), partly it was later reinforced concrete objects and a firing position in rock caverns, in which was the armament of the old forts and batteries gradually přesunována. These objects were either part of the strength of the complexes, or blocking the spaces between them.

Open and covered artillery battery consisted of several firing position usually field guns, protected from shell fragments of enemy shells earth embankments, or stone or concrete walls. Its part of there were underground shelters for the living power and hand ammunition depots. For covered the battery was the protection of weapons and crews reinforced earth or reinforced concrete nakrytím. Batteries of both types were around Trientu set up a large number, only some of them, however, were actually armed.

Builders trientské strength greatly overestimated the capabilities of the Italian army, which to her after the time war didn't even make it to the range, let alone tried to conquer by direct attack. This fact doesn't change the fact that more or less improvised the concept of construction, which the austro-Hungarian colonels Friedl, Schiesser and Steinhart under the pressure of circumstances have chosen, foreshadowed the development of fortification architecture of the twenties and thirties of the 20. century, the French just two players left for the lines starting with and an unfinished attempt of the fortification of the czechoslovak border ending with... 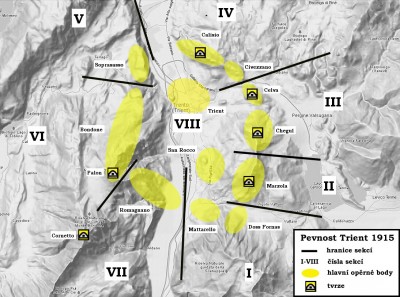