History:
Since 1938, were in the imperial naval air force enforced two completely different views on the further development and construction of fighter aircraft. The first direction of development (he was older and deeply ingrained) - produce a lightweight, highly agile aircraft with armament of two machine guns (such asA5M) of a clear goal - an opponent to outmaneuver and shoot down. The second direction (hard-driven) take account of aircraft development in Europe and in the USA, where the aircraft heavier, due to the higher wing loading, the wing harder to handle, but with the passive protection of the pilot and tanks, bigger firepower and capable of quick vertical maneuvers.

Listed the specifications of the development plan marked a 14-Shi demanded just such an aircraft, perhaps for the first time in the history of the japanese naval air force, was put a requirement on the controllability and maneuverability.
Designer Jiro Horikoshi designed the robusních shapes, dvojhvězdicový čtrnáctiválcový engine was just kapotován and an inlet for the cooling air was narrow, to increase the air flow and thus improve cooling assisted fan located on the shaft driving the propeller.
The prototype J2M1 had so many inappropriate properties (overheating the engine, in a non-compliant interval adjustable angle of attack of the blades, control of the chassis and the lack of views), that has been fundamentally redesigned by he was accepted into the armaments as J2M2 11
Production of this type of slowly and gradually gather momentum in the first six months received the navy only 11 machines. The total was made 141 pcs of this version of raiden with. Even this type of was far from good, his biggest problem was the incomplete development of the engine. The performance of the engine was possible in the short term to increase the injection of water and methanol into the intake of the engine, in this way, increased engine power, but at the same time, the increased engine speed and this resulted in that the ends of the blades were in the area of supersonic speeds and strong vibrations that are transferred to the entire aircraft.
Another problem was the landing, to land with this plane they say it was downright dangerous operations. The high landing speed in conjunction with the low cab with the wrong views that made the landing manoeuvre, which is bypassed without the crash of success, which was apparently comparable to the sestřelem napřátelského aircraft.

The production of this type was carried out in parallel with the versions J2M3. 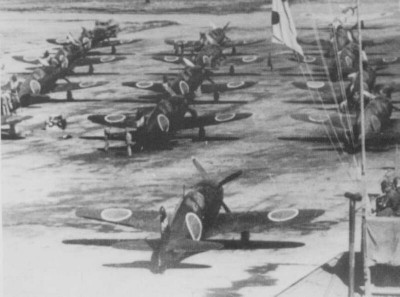