In japanese military circles was a tank Type 61 considered only as a transitional design. It was, therefore, already in 1962, launched the development of a new tank. In 1964, the carried out study work on the new concept of the following type of tank. In the years 1964 to 1967 were carried out to test new technical solutions. In the middle of the year 1968 was a japanese firm Maruko - Mitsubishi Heavy Industries in Tokyo entrusted with the production of the prototype under the designation STB-1. In September 1969 were made two prototypes.
The prototype of the STB-1 was the end of the 60. years considered to be very modern. Korba had hydropneumatic suspension travel of the wheels, which allowed for a smooth regulation of the clearance of the vehicle depending on the projížděném terrain. This suspension system was later used for tanks Abrams or the Leopard-2. The model for the tower set to become a French tank AMX-30. Korba was based on the German tank Leopard 1.
The main armament of the prototype STB-1 formed tank gun L7 caliber of 105 mm with a rifled barrel british production. In the prototype STB-1 was used in the automatic feeder ammunition, gun stabilizer and the peculiarity was the auxiliary engine.
The prototype STB-2 from the STB-1 practically did not differ much, had only to place the gun atrapu and was used for the tests of the propulsion unit.
The prototypes of the STB-1 and STB-2 have been made for its time very modern, but it increased their demands on the operator and, in particular, the production was very expensive. Due to the fact that the Japanese were not allowed to export weapons and can only produce for your own use, it was necessary to implement certain measures to reduce the cost of production of the new tank.
For these reasons, it was in a subsequent prototype STB-3 removed automatic feeder ammunition, which greatly increased the cost of production and has been challenging to operate. In the prototype STB-3 has been further implemented the change in shape of the tower. The tower was compared to the tank Type 61 extended, thereby decreasing the niche in its rear part. The side walls of the tower were more zploštěny, thereby increasing their angle of inclination. To ensure greater passive protection against cumulative missiles opponent. Command auxiliary turret has been completely removed. Maintained just the hatch of the commander, which was slightly lifted up, because of the installation of the periskopů for the circular observation of the battlefield.
Subsequent prototypes STB-4 and STB-5 from the mass-produced machines did not differ and were used mainly for testing. STB-4 was tested in terms of armament and fire control system and STB-5 was used for testing the riding qualities in the field.
In mid-1973 was built the prototype STB-6, which became the final model for the mass-produced tank. The armament of the tank was included in the September 1975 and he bore the designation of the Type 74. Serial production of the tank Type 74 took place in the years 1975 to 1989. In January 1980 was produced 225 tanks of the Type 74. The total production of this tank until the end of its production in the year 1989 amounted to 873 pieces. From the mid 90's. years of the last century is a tank Type 74 gradually replaced by a more modern tank Type 90. According to some sources in this time in service of the japanese army located approximately 700 pieces of taku Type 74.

Korba and the tower

Armor protection of the tank


The relatively weak armor for the previous tank Type 61 led by the tank type 74 to its amplification and modification. The Tank was made with homogeního breastplates. Korba has been welded with plates and tower set was casted. The tower was based on the French tank AMX-30. Compared to the tank Type 61 was longer and had more chamfered sides, thus ensure greater ballistic protection against cumulative missiles opponent. Some tanks were equipped with a blade in the front part of the hull, designed to excavations a foxhole in the focal points of the unit. These also serve to increase the ballistic protection in the front parts of the tank. Korba and tower provide osádce protection against missiles from infantry weapons and shell fragments from artillery shells.

Chassis was made up of five pojezdovými wheels on both sides of the hull, without the bearing of the pulley. The driving wheel was at the back and stretching the front. Suspension hydropneumatic tank was and it was the peculiarity of this vehicle. Allow to set the headroom of the front, the back and on the sides of the tank depending on the terrain. The headroom it possible to regulate in the range of 200 to 650 mm. On a stationary tank was possible using the hydropneumatického the suspension system of the chassis to shrink its height up to 2 030 mm and thus not only greatly reduce its silhouette, but also to increase the angle of elevation (elevation) the gun up to about 6 degrees. This method of suspension of the chassis was, however, very expensive and, in addition to Japan it no other state did so. Track the belt was wide 550 mm. The length of the contact area between the belt and the terrain was 4 000 mm.

The Tank was powered by a 10válcovým, air cooled, diesel engine type Mitsubishi Type 10 ZF22 WT on the performance of the 535 kW at 2 200 rpm./min. Compared to its predecessor Type 61, was the Type 74 equipped with efficient motor, which has extended its range from 200 km to 400 km.


the Main armament and ammunition
The main armament of the tank formed the british gun L7A3 caliber 105 mm, produced under license by the japanese firm Japan Steel Works. The japanese manufacturer edited by brzdovratné device, the barrel of the gun was equipped with a spacious exterior protective mask and ejektorem without termoizolačního of the casing. According to some sources the thermal insulation for the guns began to use since 1988. Gun was stabilized in two planes. The elevation of a gun was awarded electrically, in the case of an emergency manually. The rotation of the tower was also electric, or manual. Elevated feeder is in the standard mode was in the range of from – 6,5 degrees to + 9,5 degrees. In the case of the use of hydropneumatického settings bright the height of the chassis of the tank (after the reduction of the rear part of the chassis) is the range of elevation the gun was from - 12,5 degrees to + 15 degrees. Gun was in the context of a turret of an ensemble fully rotatable and its angle of azimuth amounted to 360 degrees. Firing rate ranged between 9 to 10 shots per minute. Vezený palebný an average of 55 pieces of ammo caliber 105 mm (14 pieces stored in the tower). Gun to fire, used the standard NATO ammo, or produced under license munitions M735 type of APFSDS.


the Additional armament and ammunition

The Tank was equipped with a system of fire control, which consisted of the type sight J2 with a built-in laser rangefinder was interesting and from the electronic balistického computer. Ballistic computer automatically assume the data on the distance to the targets from the dálkoměru, the temperature data, the status of the gun and type of ammo gives the shooter or the master manually. The commander of the tank had five available panoramic periskopů, located around the perimeter of the commander's hatch, allowing the monitoring of the battlefield in 360 degrees. Furthermore, it was the command post equipped with an infrared viewing device of the type J3 with a laser rangefinder was interesting with osminásobným magnification.
The habitat of the shooter was equipped with an infrared viewing device of the type J2 with osminásobným magnification and a laser rangefinder was interesting type J1 coaxial with a gun.
Charger had at their station available observation device J2 with osminásobným magnification, swivel 360 degrees.
Tank driver could monitor the driving space of the three stable periskopů type JM17 model 2 fourfold magnification. One was placed facing in the direction of travel. The remaining two were placed slightly obliquely to the direction of the drive and allow drivers to better monitor the situation after the sides of the tank. The driver has a central periscope at their station to replace an active or a passive infrared device for night driving. More dohlédnutelnost of the driver to ensure the infrared lamps.
Tanks of the Type 74 produced from the mid 80's. years of the last century were on the left side of the gun equipped with a large infrared lamp. Its range was up to 3000 m for the white light and a 1000 to 1200 m for infrared light.


Systems for the survival of the crew

The Tank was equipped with a filtroventilačním device against WMD and fire-fighting equipment. Without training could tank wading to a depth of 1.0 m, with adapter for deep wading to a depth of 3.0 to m. Some of the specimens were equipped with dozerovou blade to adjust the terrain.
On the rear part of the bucket was placed the box with the phone, which serve for the connection with the crew inside the tank. This has permitted a better synergy with the unit conducting combat operations in the vicinity of the tank. 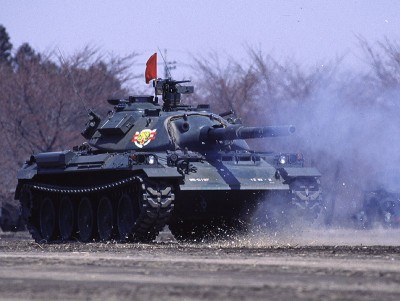