Full cavalier of the Order of Glory

She was born 15. July 1893 in Kronštadu. Before the war she graduated from the snajperský course in a Osoaviachimu and worked as instructor sports and shooting sport organization "Spartak" in Leningrad. At the turn of the years 1939/40 volunteered to the Red army, in which served whether or not her son and she has participated in as a nurse the soviet-Finnish war.

At the beginning of the of the Great patriotic war become the nurse of civil defense of Leningrad, where he served for the entire time of the blockade of the city. After her breakout in January 1944 entered again into the ranks of the Red army and became a sniper rifle 284. rifle regiment. At the end of February had three dozen of the occupiers. 2. in march 1944 she was awarded the Order of Glory 3. degree - her third medal. During the fighting in the Baltic states in August of the same year she earned the Order of Glory of 2. degree. At that time began with the training of young snipers and the end of the war they prepared for a queue of several hundred. In the battle for the city Elbigen in February 1945 together with his students knocked out several machine-gun nests of the enemy and on her rifle Mosin 91/30 appeared no the hundredth notch. 2. may 1945, it fell shortly after the capture of Stettin.

29. June she was awarded posthumously the Order of Glory 1. degree, thus became his full cavalier in memoriam.. 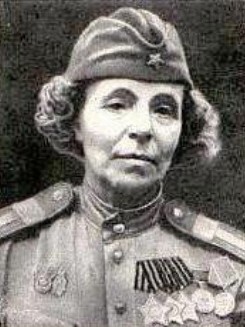