URL : https://www.valka.cz/Leopard-2AV-t84821#468710Version : 0
brano MOD 9 years ago
During 1973, negotiations took place between the governments of the United States of America and the Federal Republic of Germany to standardize the components of their tank armament for the 1980s. These were concluded by the signing of a cooperation agreement, which was signed on December 11, 1974 and was supplemented by an amendment in July 1976. Part of the agreement also discussed joint tests of the German Leopard 2 prototype and the American XM1 prototype, co-produced by Chrysler and General Motors. A process has been agreed to compare and design Leopard 2 so that it can meet US production performance and cost requirements with minimal changes and modifications. The German company Krauss-Maffei was provided by the American side with data on the performance and ballistic resistance of the XM1. Which did not have a big impact on the construction of prototypes, as at the time of signing the agreement, 15 prototypes (PT 01 - PT 15) had already been produced and the remaining two (PT16 and PT17) were before completion.
Based on the new situation, Porsche, Krauss-Maffei and Wegmann were commissioned to prepare and manufacture Leopard 2AV prototypes (Austere Version). Modifications compared to the original prototypes included a modified armor of the tub and a new turret, based on the T14 turret with a less sophisticated fire control system. Two new chassis (PT 19 and PT 20) and three towers (T19, T20 and T21) were built, which represented different solutions to achieve the required parameters. The Leopard 2AV PT19 was equipped with a T 19 turret with a fire control system and sights designed by Hughes. For tests in the US, the PT19 was armed with a 105mm L7A3 cannon the same as used by the XM1. However, a simple modification could be armed with a newly developed 120 mm cannon with a smooth bore. The T20 tower had a German fire control system with EMES 13, which the Germans used in their test program. The T21 tower was also equipped, but it was equipped with a 120 mm cannon with a smooth bore made by Rheinmetall from the very beginning.
Leopard 2AV and XM1 were originally expected to be tested at the same time, but the German program was in a time lag due to modifications. Therefore, the US Army decided to apply for authorization to produce the XM1 presented by Chrysler and not wait for testing of the German prototype. Nevertheless, in August 1976 were transported by air C-5A Galaxy PT19/T19 and PT20 with an additional load simulating the tower to the United States. Comparative Development Test (DT) and Operational Test (OT) were performed in Aberdeen on a test site. Tests have shown that Leopard 2 and XM1 are comparable in firepower and mobility. However, the American tank outperformed its German competitor in armor and therefore was chosen XM1. German companies bitterly accused the Americans of using PT07 prototype technology to develop the XM1. PT07 was provided to the Americans shortly after the signing of the cooperation agreement and they underwent intensive tests on it. After the return of the prototypes to Germany and other tests, it was decided to use a 120mm cannon as a standard. The cannon was offered by the Americans, who used it in other XM1 production series.
In September 1977, it was formally decided to supply 1,800 Leopards 2 to the German Bundeswehr, which were to be delivered in five production runs. Krauss-Maffei was selected from the original consortium of Krauss-Maffei, Maschinenfabrik Kiel (MaK) and Thyssen-Henschel as general contractor and system manager. MaK became a subcontractor and was to supply 45% of the total production of tanks. Wegmann, as the supplier of the complete turret, was responsible for the integration of the EMES 15 fire control system manufactured by Hughes and the 120mm cannon supplied by Rheinmetall. In total, it is estimated that 25,000 different components were supplied by various subcontractors. 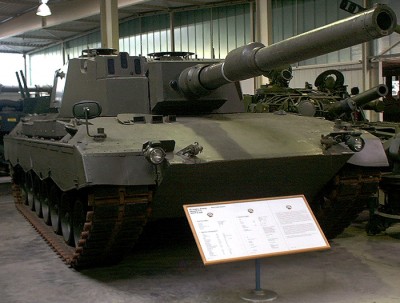