URL : https://www.valka.cz/SWE-RBS-70-NG-protiletadlovy-raketovy-komplet-t127221#614197Version : 0
Martin Smíšek MOD 4 years ago
RBS-70 NG (New Generation) is so far the last generation of portable (in my opinion rather portable) PLRK type RBS-70 developed by the Swedish company SAAB.

Its military trials were completed in Sweden at the end of 2011 (if I understood the company's representative correctly, perhaps in November 2011) with the participation of representatives of several dozen countries. I had the opportunity to play with this set a bit and I can say that its operation is very simple. I fired my first "rocket" (of course only by simulation) after about a minute of instruction (in English) and I immediately hit the target (maybe a coincidence or a simulator setting?). As a shooter used to sets 9K32M Strela-2M a 9K38 Igla I had only one problem fired from the shoulder - movement coordination - control of the set is performed only with hands, not with the whole body, similar to eg in 9K35M Strela-10 [ / url]. After rough guidance of the set towards the target, the target is found in the sight, turning the wrist of the left hand to each other turns on the laser irradiator (I was warned that I must hold my hand in this position until the target hits, otherwise the laser beam turns off), system in it indicates to the sight the capture of the target, which the shooter confirms by pressing the button (with the thumb of the left hand), which "locks" the target. Pressing the next button (again with the thumb of the left hand) will launch the rocket. The simplicity and comfort of control (the shooter sits, does not have to hold 10-15 kg of the racket on the shoulder, etc.) is, in my opinion, balanced by two shortcomings - the first is that it is not guided "Fire and forget" - the set must irradiate the target to the end flight of the missile (which on the other hand allows the shooter in case of need to correct the flight of the missile), the second is the dimensions of the set. Bolide's own rocket (below it is a screen on which the airspace was simulated) [url=https://galerie.valka.cz/showphoto.php/photo/168824] 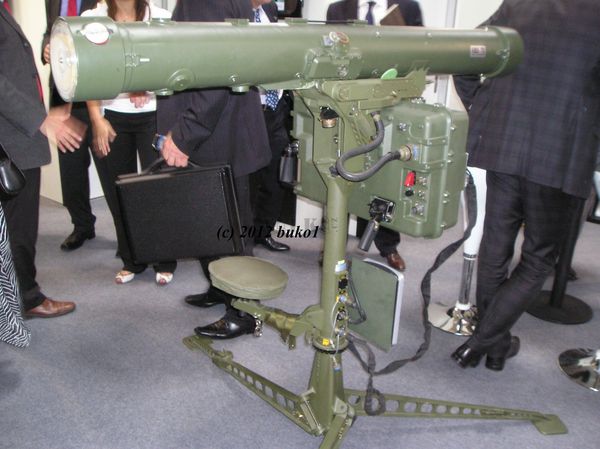 Deputy minister of defense for the management of the Section of armaments and acquisitions Daniel Koštoval, the director of the aid Ministry of defense major-general Jaromír Zůna and a representative of the company Saab Dynamics AB Kristian Wallin on Tuesday 18. December 2018 symbolically in the areas 25. anti-aircraft missile regiment in Strakonice signed a contract to supply 16 sets of anti-aircraft missile system RBS-70 NG.

The estimated scope of supply:

In connection with the anticipated introduction of the system RBS-70 NG (to the signing of the contract occurred with a considerable delay until the end of 2018) to the armament of the Czech army implemented a project of the defence research and development TePP NG – the Integration of shorad system RBS-70NG to ASVŘP. The Program was solved by RETIA over the years 2014 to 2016 and the total recognized costs to be paid from the budget Ministry of defense reached the amount of 27 525 000 Kč. The main reason for this was the inability to connect the new RBS-70 NG for the help of the existing TePP (Terminal of the firing element) to ASVŘP (automated system of command and fire control) RACCOS and then the effort to increase the combat capacity of controlled firing elements by extending the functionality of TePP on the function of the command to match the needs of the squad leader. In the framework of the project was therefore to address the issues of:
- integration of the RBS-70 NG to ASVŘP RACCOS;
- functional, system and technical architecture means that integration will ensure (TePP NG);
- new application software to support the functions of the C2 (Command and Control - command and control) and the steps of the TLP (Troop Leading Procedures - the procedures the management of the troops);
- new application software to support otherwise handled or completely new technical features its own firing element;
- optimization of the communication system;
- technical implementation of the TePP NG in the form of a prototype.

In the framework of the project solution, or perform military tests developed by the terminal of the firing element TePP NG, took place at the end of October 2015 and the first sharp shooting from an ensemble of RBS-70 NG on the territory of the Czech republic, which took place at the shooting range Podvoří in the military area Boletice.

Photos: Ministry of Defense of the Czech Republic - www.army.cz