URL : https://www.valka.cz/Curtiss-XPW-8A-t124393#423726Version : 0
Aubi MOD 9 years ago
Třatí prototype XPW-8 (23-1203) keep at the factory for the installation of new jednopříhradových wings. The heavier the beam, so it was solid enough even with just one set of struts. From the previous prototypes also differed the new radiator, this time a classic and zabodovaným flat in the middle of the upper wings, and the rudder without balance. In this form got company designation Model 34 and the army designation XPW-8A, and was an army air force taken in September 1934. 4. October 1924 was deployed into the race for the Pulitzerův cup, had previously been but still problematic the radiator in the wing replaced with a new one, through a tunnel located under the bow, after the model of a competitive XPW-9. This modified XPW-8A piloted by lieutenant Stoner reached the third place and the speed of 270 km/h.

During October of 1924 then conducted another round of tests at McCook Field, where he was deployed XPW-8A against the XPW-9. Both machines in them were more or less the same speed, rate of climb and dive, Boeing, however, still led as far as agility and maneuverability, which convinced the army to reorder other serial PW-9, and even proposed in December Curtissu to consider the adjustment of your machine to incorporate the trapezoidal wings after the model of the Boeing. Curtiss agreed, and XPW-8A so got the new again wings of unequal span, this time with a profile of the Clark Y and the footprint okopírovaným of the photos Boeingova machines, and other minor modifications. Modified machine, now with the designation XPW-8B, was the air force taken in march of the following year.

With the new form no longer was the air force sufficiently satisfied, and 7. march 1925 was from Curtissu ordered mass production of this type. In may, 1924, the air force decided to abandon the complicated and, in practice, inoperative, the system of the seven fighter categories, and the production version of the XPW-8B became the first type, designated under the new scheme - P-1.. 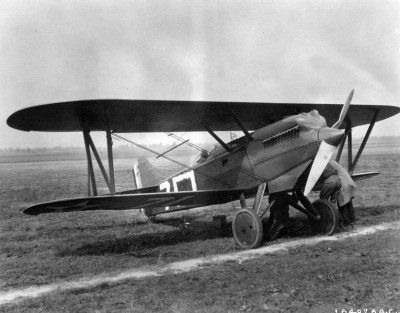