A two-seat trainer version developed from the year 1962. Compared to single-version F-105D with her extended hull and a reduced supply of fuel, which were the changes forced by the need of building a second cockpit for the instructor. Bangladesh was virtually identical with that in version F-105D. SOP has been for variants of the F a higher and wider. The first batch of F-105F received 4. tactical fighter wing in December 1963. Each squadron of the u.s. air force using the type of the F-105 was used in at least one machine version of F. Many of the F-105F have been deployed in the Vietnam war, where he flew bombing missions together with jednomístnými F-105D.

From January 1966, it was companies of the Republic in the framework of the programme of Wild Weasel II, edited 86 two-seat F-105F for the mission to suppress enemy air defense, on the vietnamese battlefield. This version was unofficially known as the EF-105F, in June 1967, receiving such modified aircraft, the official designation of the (F-105F (WW). The EF-105F were equipped with a means for conducting electronic warfare. To the destruction of the vietnamese radars aircraft used missiles AGM-45 Shrike. The EF-105F departed the first mission over North Vietnam in June 1966. In contrast to the single F-105D here have been operationally used until the end of the us presence in southeast Asia.

19. April 1967 led the crew, which consisted of Maj. Leo To. Thorsness (pilot) and Capt. Harold Johnson (the operator el. systems), above the "North" formation Kingfish consisting of the aircraft, the EF-105F. After a "Thudy" attack on one operating section equipped with a complex of the S-75/SA-75 hostile MiG-17 shot down wingmana with volacím sign of Kingfish 02. Thorsness and Johnson (they flew in the machine serial number 63-8301, callsign Kingfish 01) then secured the cover of the operation to rescue the sestřelené of the crew, while the gun M61A1 themselves destroyed two of Mig-17. Then, what vypotřebovali all munitions, were "bait" for the other severovietnamské fighter to odlákali their attention from the rescue effort (which ultimately was unsuccessful). Maj. Thorsness for his heroism he received the Medal of honor, Capt. Johnson then Cross force. Thorsness and Johnson, who have served in 357. TFS subordinate 355. TFW, they themselves were in a few days shot down and taken prisoner..
URL : https://www.valka.cz/Republic-F-105F-Thunderchief-t1232#5006Version : 0
Admin MOD 19 years ago
F-105F-1-RE (EF-105F) Thunderchief (serial number 63-8301, "Jinkin Josie"), the 357th Tactical Fighter Squadron, 355th Tactical Fighter Wing, Takhli, Thailand, 1968. Crew of the aircraft consisted of Capt. Vern Harris (pilot) and Capt. Kim Pepperell (EWO). The aircraft is under the wing podvěšeny missiles AGM-45 Shrike and probably the cougars , the CBU-24/B.. 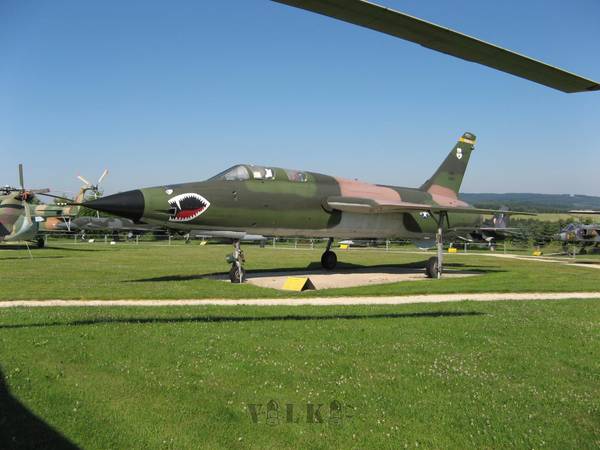