In 1954, he began the Japanese self-defense forces to deal with the idea of the project of the new tank, which should replace the outdated american tanks of the type M47 delivered from the USA. In the year 1957 were made four prototypes, intended for testing. Two prototypes of the tagged STA-1 based on the machine the bottom of the tank Type 4 Chi-To produced in 1944, had seven undercarriage wheels and four supporting rollers on both sides of the hull. The other two prototypes of the tagged STA-2 should six the travel of the wheels and the three supporting rollers on both sides of the hull. The designers of the two prototypes clearly based on the american tank M47 which new tanks to a large extent similar. Prototype testing was conducted in the end of the 1960's. The result of testing brought the decision to use the serial production of the machine the bottom of the STA-2, fitted with six pojezdovými reels and three pulleys on both sides of the hull. The tower is structurally different from the american original M47 only in the small details. As the main weapon was elected a tank cannon M36, again taken from the american machines M47. On the basis of these design solutions were made the other two prototypes under the designation STA-3 and STA-4 (together was made 10 prototypes), which are from subsequent serial pieces differed only in minor structural adjustments. The new tank was designated the Type 61 and the serial production was started in the year 1962. Contract for the production of the tank received the company Maruko, which is part of the group of Mitsubishi Heavy Industries. In 1962, it was made just 10 pieces of tank Type 61. And in the following year, 1963, the factory produced only 10 specimens of the new tank. The year 1964, however, have brought a doubling of production and the production line of the company Maruko left 20 pieces of new tanks. In the years 1965 to 1966 there was a further gradual increase in the production of 30 pieces a year. Most tanks were produced in the year 1970, when from the production lines came 250 new machines. To the end of production in 1971, was produced and delivered by the japanese armored units 560 units tank Type 61.
Even in 1990, in active service of the 400 units of these machines. In 1995, the then japanese armored units still use mainly in the training of 190 pieces of tank Type 61.
Tank Type 61 was the first post-war tank produced by the japanese arms industry, and can be described as a tank of the first generation. The modernization of the tank the Type 61 was very limited and did some subtle structural details. For example, the incorporation of the stabilizer of a gun it was for economic reasons done, because the tank Type 61 was from 1975, gradually being replaced by more modern tank Type 74.


Korba and the tower

Tank Type 61 is a classic design. Body of the tank was welded from the armor plates. Sloped frontal armor passes in the upper part of the horizontal ceiling of the hull, which stretches along the entire length of the tank. The driving compartment is in the front right part of the hull, just before the tower. Příklop the driver was a one-piece and odklápěl with the direction on the right side. When driving in a combat position, used the driver three gun, placed in front of the hatchway in the body armor.
Tower of cast armor, oval in shape, was established in the central part of the hull. During its construction it was from the tower of the american tank M47, from which it differed mainly by the dimensions of the in its back part. The rear of the tower was extended similarly as the case of the us tank destroyer M36 Jackson. This adjustment increased the internal space of the tower and the site has been used for the location of the radio station, and for the extension of the space of the crew. The tower was equipped with a cannon of the caliber of 90 mm.In the right side of the tower was the habitat of the shooter, and behind him the master, the left side was reserved for the chargers. The habitat commander was equipped with a command turret in the right part of the ceiling of the tower. Was equipped with four gun and a gun for anti-aircraft machine gun 12.7 mm.
In the rear part of the hull was the engine compartment. The exhausts were placed on the wings, above the fourth and fifth pojezdovým around on both sides of the hull.

Armor protection of the tank


The relatively weak armor, it was considered one of the weaknesses of the tank Type 61. Korba and tower provide osádce protection against missiles from infantry weapons and shell fragments from artillery shells.

Chassis was made up of six pojezdovými wheels on both sides of the hull, the motion of the mass torzními bars. The first, second, fifth and sixth running round after both sides of the hull was equipped with a hydraulic shock absorber. The driving wheel was at the front and fitted at the rear. The upper branch of the pojezdového tract was formed by three supporting rollers on both sides of the hull. The track belt is wide 500 mm. The length of the contact area between the belt and the terrain was 3 700 mm.

The Tank was powered by a 12válcovým four-stroke compression-ignition engine, přeplňovaným sectional view of a turbocharger with direct fuel injection type Mitsubishi Type 12 WT 21 WT (V-12) on the performance of 447 kW at 2 100 rpm./min. The engine had a relatively high fuel consumption, which reduced the range of the tank at only 200 km on the road.

Tank Type 61 was the only tank in the world entered into service after 1945 with the placement of the gear in the front part of the hull on the left side from the driver. This way of storing the gearbox proved to be a further weakness of the tank. Torque transmission between the engine and the transmission to provide a drive shaft, which has been stored across the body of the vehicle and therefore of the battle space. This resulted in a relatively large loss of space inside the vehicle. Subsequently, the maintenance or possible replacement of the damaged shaft has been a challenging and complicated.

Torque transmission from the engine to the chassis to provide for a mechanical gearbox with 5 ratios for driving forward and 1 reverse.


the Main armament and ammunition

The main armament of the tank formed the american cannon M36 caliber of 90 mm, produced under license by the japanese firm Japan Steel Works. It was equipped with jednokomorovou úsťovou brake in the shape of the letter T. For úsťovou brake was placed in the ejector. The cannon was not equipped with a stabilizer, which greatly reduced the accuracy of the shooting while in motion. The elevation of a gun was awarded to a motor, in case of emergency manually. The rotation of the tower was also a motor, or manual.
Vezený palebný an average of 50 pieces of ammo, the caliber of 90 mm.


the Additional armament and ammunition

Additional armament of the tank formed a machine gun type of Browning M1919A4 caliber 7,62 mm yoked with a cannon. On the command turret was then lafetován anti-aircraft machine gun M2HB calibre of 12,7 mm. In the later specimens have been added to the three zadýmovací grenade launchers on both sides of the rear part of the tower. Vezený palebný average at the coupled machine gun 4 000 pieces of ammunition caliber 7,62 mm and with an anti-aircraft gun 525 pieces of ammo.


Systems for the survival of the crew

The Tank was not equipped with a filtroventilačním device against WMD and therefore the crew had to use the resources for the protection of the individual. In the uk, the vehicle was not even the fire-fighting equipment. Some tanks were equipped with infrared device for conducting combat operations at night and in reduced visibility. The driver has a central periscope at their station, to replace the active infrared periscope. Without training could tank wading into the depth of 0,99 m.

Ing Milos Soukup Tanks 2. - 3. part, released the Military academy in Brno and Publishing Ace - video in cooperation with the editors of the Army technical magazine ( ATM), the first edition of the Prague 1995, ISBN 80-85960-02-8.

Magazine Tanks - a collection of armored vehicles no 15 issued in 2007, the editors of a PRESS-PYGMALION in Český Těšín 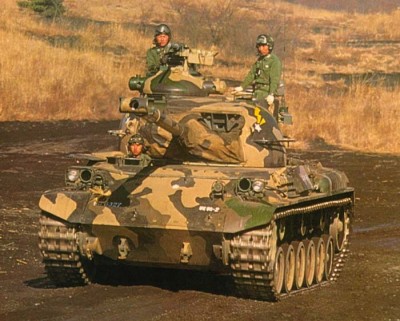 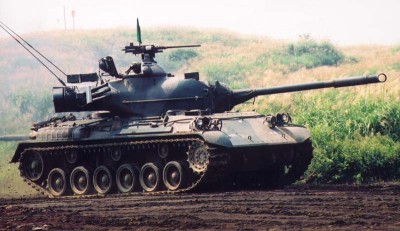 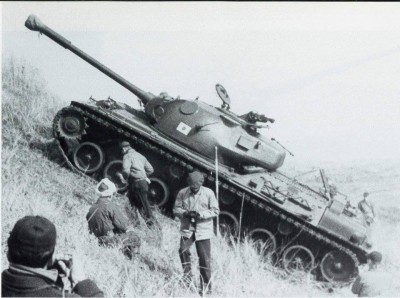