URL : https://www.valka.cz/Ccheng-tu-FC-1-Siao-lung-t101893#367945Version : 0
Snake MOD 11 years ago
Chengdu FC-1 Xiaolong (China) / JF-17 Thunder (Pakistan) is a lightweight fighter and multi-purpose aircraft developed at the turn of the 20. and 21. century in the people's republic of China (continental China), in cooperation with Pakistan. The chinese designation FC-1 Xiaolong is the abbreviation for Fighter China-1, Xialong means Fierce (furious) dragon (Fierce dragon). Pakistani JF-17 stands for Joint Fighter-17 Thunder is in English Thunder.

The machine is a single-engined, could operate in any weather, has a modern avionics (glass cockpit, HUD) with open architecture and weapons, chinese and western production. Management is elektroimpulzní (fly-by-wire), backed up. The first machines have a radar NRIET KLJ-7 (apparently due to the KLJ-10 on the Chengdu J-10), its reach should be up to around 100 km. An interesting element is the use of a "diverterless supersonic inlet" for the deviation of the air flowing around the fuselage from the air intakes to the engine (used on the Lockheed F-35). The engine is a Russian turbofan Klimov RD-93, which is a member of a family of engines emerging from the RD-33 of MiG-29.

It should be a lightweight, versatile and relatively inexpensive machine. Similar machines are such as the indian LCA Tejas, or the Korean F/A-50 Golden Eagle. The low price (it is estimated around 15 million u.s. dollars) in combination with decent performances should be a big draw for the less affluent states, where appropriate, enable the acquisition of a larger number of machines to complement the elite fighter of the machines (in the case of China). The main candidate for the introduction of aircraft into service, Pakistan is a (planned to purchase about 150 to 250 machines) and China (maybe 200 machines, has not yet fixed the order) and other states.

The Program began with the joint declaration of China and Pakistan in 1998, followed by the signature of the treaty in 1999.
Developed was in cooperation of the chinese Chengdu Aircraft Industry Corporation (CAIC), China National Aero-Technology Import and Export Corporation (CATIC), the Pakistan air force (Pakistan Air Force) and Pakistan Aeronautical Complex (PAC). During the development of some of the problems with sanctions (western avionics) and the restrictions of export of the Russian engines), which, together with the amendments to the requirements on the performances of the machine prolong the development of the (originally intended for the first take-off occurred in 1996), however, the machine has been developed to today's standards extremely quickly. Guesses about it, that the machine is an adaptation of the Russian project, the MiG-33 seem to unconfirmed. The first take-off 25.8.2003, předsériové machines in operation in Pakistan since 2007. The first unit officially in the service of Pakistan from 18.2.2010.

In Europe JF-17 appeared on the show Farnborough 2010 in the Uk. Along with him was exposed to the equipment:
missiles air-to-air SD-10A, PL-5EII
antiship missile C802A
is a sliding puma LS-6
telescopic container WMD-7
deleting a container KG300G 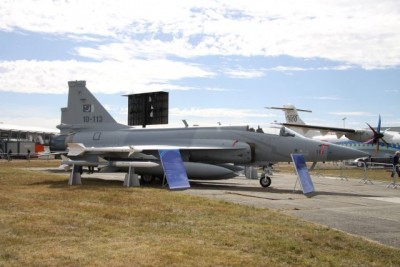 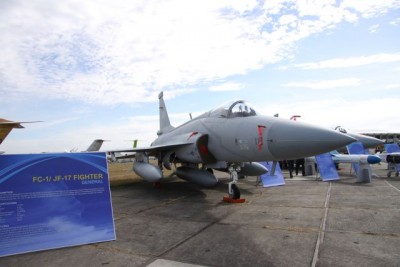 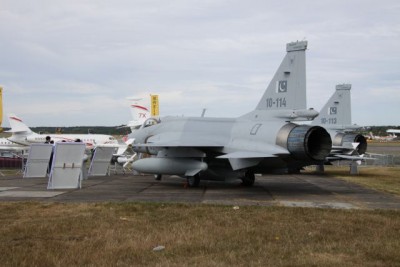 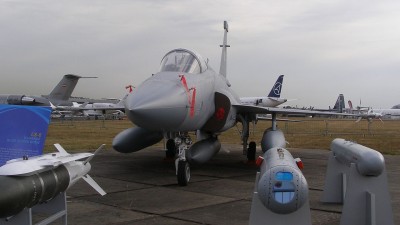 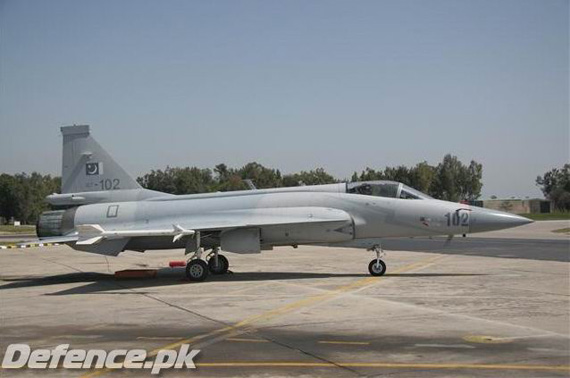