URL : https://www.valka.cz/SOV-SU-76-t177380#20818Version : 0
petr.archi 18 years ago
The anabase of the origin of this self-propelled gun was long and interesting. This light self-propelled gun was the first mass-produced machine of this category in the USSR. It was created in response to German self-propelled guns, which proved great benefits.
The requirement for the development and production of such a self-propelled gun was given to the development offices in early 3/1942. The machine was to use the light tank platform T-60 and T-70. Its primary armament was to be a 76.2mm cannon ZIS-3. The development was entrusted to the plants no. 38, No.40 and GAZ.
However, the intention to develop a self-propelled gun of light construction was before 1942. There were various attempts to create a kind of universal platform based on the older light tank T-60, along with the use of truck components ZIS a GAZ. On this basis, they were to be created as a self-propelled gun with a 76.2mm cannon (in 1939 with USV, in 1940 with a tank cannon F-34), as well as anti-aircraft self-propelled gun with a 37mm cannon, tank destroyer with a 45mm cannon, infantry fighting vehicle, ambulance, self-propelled mortar, workshop vehicle and artillery tractor. Between April 14, 1942 - April 15, 1942, a plenum of artillery experts and officials met, where the achieved development results and new requirements for future development were taken over. Completing the development of this universal platform was the decision to focus only on the development of a self-propelled 76.2mm cannon to support infantry and anti-aircraft versions. The development of the self-propelled gun was assigned to the plant no. 37 and V.G. Grabin. Original project from factory no. 37 used the extended platform T-60 and a modified divisional cannon ZIS-3 Š (šturmovyj). However, this project was rejected.
Other construction groups also worked hard on this project.
The company UZTM (Ural plant) together with the design office of the plant No.37 developed a project SU-31 using the platform T-60 and the main armament was to form a 76.2 mm tank cannon ZIS-5 (BGS-5 on the platform SU-32). The project was sold in 10/1942 to plant no. 38, where it served as inspiration in the development of the SU-76.
In 6/1942, new specifications were developed for the project of a self-propelled gun of this concept.
19.10.1942 it was decided which plants to prepare by 1.12.1942 new projects of self-propelled guns caliber 76.2 mm, 122 mm and anti-aircraft self-propelled gun with a 37 mm cannon. The plants no. 38 (Kirov plant) and GAZ. The development of the anti-aircraft vehicle fell to the plant no. 37.
The companies prepared their prototypes in 11/1942. The company GAZ its project referred to as SU-71. Plant No. 38 again its project SU-12.
The company GAZ used construction nodes T-60/ T-70 on a unified extended chassis T-70. The machine was not fully armored, the crew's combat area was open from above. The armament consisted of ZIS-3 and 2 machine guns DT. She prepared two prototypes by the deadline. After the tests, it was found that it did not meet the requirements and an extensive reconstruction of the motorcycle transmission parts would be necessary.
Plant Project No. 38 SU-12 had a fully enclosed structure. Again, he used an extended landing gear T-70, the same cannon armament (instead of machine guns, the crew had two submachine guns PPŠ-41) and overall structural units as a competitive project. This project was accepted with comments and the machine under the designation SU-76 was included in the armament of the Red Army. By the end of 1942, the first series of 25 SU-76s was produced. The machines were assigned to the training unit and later to the first two separate regiments of self-propelled artillery (No. 1433 and 1434).These were deployed to the Volkhov front, where the immaturity of the structure manifested itself. The machines suffered from high failure rates caused by improper drive solutions. It consisted of two GAZ 202 engines connected by two 4-speed GAZ-MM gearboxes. However, this connection lacked synchronization and therefore the transmission gears were destroyed. The production plant therefore quickly proceeded to the reconstruction of the structure, which led to the type SU-76M.

In total, about 560 machines were produced in their original form (SU-76). They actively participated in the fighting and were continuously adjusted to the standard SU-76M. 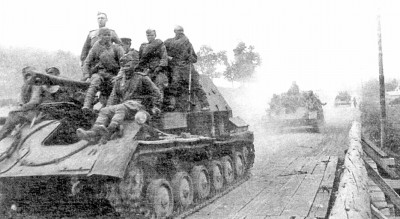