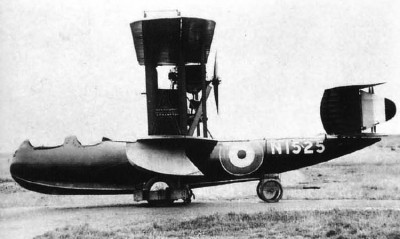 
Pemberton-Billing Ltd. Factory during the "great war", with few exceptions, it did not produce its own types, but focused on repairing aircraft from the French battlefield and building naval aircraft according to government specifications. The three naval types, which were designed by the Admiralty's Aviation Department, also laid the groundwork for the company's own post-war development.


The Admiralty Aviation Department also designed the AD Flying Boat as a patrol aircraft for cooperation with warships. The creator was Lt. Linton Hope and got the form of a conventional biplane seaplane with biplane tail surfaces and a double rudder. The pilot and observer sat classically in registration in the bow, behind them was an engine with a thruster. The wings could be folded forward for easier storage on the ship. In 1915, two prototypes were built at the Pemberton-Billing company, which were then supplemented by 27 machines from the originally ordered eighty-five-piece series. The first flight took place in 1916, the aircraft produced did not get much action due to the relatively early end of the war. Instead, they found civilian employment relatively quickly.


The parent company, meanwhile renamed Supermarine Aviation, bought back 19 aircraft after the war, which it rebuilt for civilian use under the name Supermarine Channel Mk.I. In addition to replacing the original Hispano Suiza 119kW engine with a Beardmore engine, the conversion also included the creation of three open passenger cabins. The first takeoff of Channel I took place on July 23, 1919, and the Supermarine branch first provided air traffic between the south coast of England and Le Havre using ten Channels (G-EAED to G-EADEM). Their use proved so successful that orders for other machines from Norway soon arrived (three machines for Det Norske Luftfartrederi A/S, marked N-9 to N11), where they were to operate on the new Kristiania (Oslo) -Stavanger- Aberdeen. Two of these machines, the N-11 and N-9, gradually fell into the hands of the Norwegian Navy as F.42 and F-44, the other two machines (F.38 and F.40) were acquired by the Navy in a different way. The type remained in service until 1928.


In the spring of 1920, Bermuda and West Atlantic Aviation bought three of the Channels (G-EAEF, G-EAEG, G-EAEJ), which operated tourist flights with them in the Bahamas for the next ten years. In 1922, three machines were purchased by the Japanese Navy, a year earlier another traveled to Venezuela. One machine (here with the license plate G-NZAI) flew in New Zealand on the route from Auckland to Wellington, and perhaps the same was also used by the New Zealand Navy for training. These training machines were probably again "militarized" by placing a moving machine gun.


In 1920, a version of the Channel Mk.II was created with a 179kW Armstrong Siddeley Puma engine (three machines, perhaps rebuilt from version I). In 1921, one Channel II was purchased by the Swedish Navy, which allegedly used it with skis. However, a year later, before the start of comparative tests with the German aircraft Caspar S.1 crashed at the naval base Harsfjärden and survived from him only the engine. Another machine between 1921 and 1924 was used by the Chilean Naval Air Force. In 1920, an improved prototype was created called Supermarine Commercial Amphibian, which had a closed cabin for two passengers and, as the name suggests, was an amphibian. He used the proven Rolls Royce Eagle VIII as an engine. In the end, however, it did not get into production, because at the same time a more advanced civilian flying boat Supermarine Sea Eagle was designed. 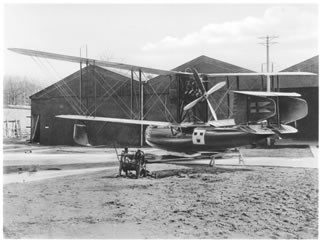