At the end of the year 1934 were demanding test programme of the two vehicles, prototypes of tanks BT-7, one with a gun of 45 mm and the second 76,2 mm in welded towers with rounded shapes and a machine gun at the head of the bucket. The commission's view was clear - the new tower is a production complex and expensive, the driver cannot at the same time to drive or operate a machine gun. Gun driver to remove, the use of the tower of the BT-5 or a new T-26.

In serial machines, without the front of the gun in a truck bed with a more powerful armor, which was of most welded with enlarged workplace of the driver, hiding the new engine M-17T (the design of the BMW) and an enlarged fuel tank. It has upgraded the gearbox and the main clutch.Morozovem and the side of the clutch prof. Zaslavským. From the beginning of the production were used to the old tower with a gun of 45 mm and a coaxial machine gun and a frame antenna, but in 1937, begins to install the new celosvařovaná tower with the same force of armor and armament, and a modern conical shape and firm pole support made antenna. Was the bear a gun and a fan, the master and the charger into it getting a new type of round manhole - type"Mickey Mouse" and be able to use the rear machine gun DT. Part of the vehicles was equipped with a PL machine gun P-40, which was placed on a circular was coming to the place of one of the hatch.
In 1938, has been upgraded sights, the belts and the driving wheels. On some of the vehicles were mounted above the gun, two spotlights for night shooting, in practice, but should not be used, because they demaskující effect. Part of the vehicles (BT-7M) was already equipped with diesel engines In-2.

In 1935, it was the factory ChPZ For merit in the field of manufacturing of tanks awarded the order of lenin.

The vehicle BT were at the end of the thirties the second most used tank of the armed forces of the USSR, taken by the army was about 8 063 ks and about 200 pieces of the NKVD. Sevens participated in all of the martial performances as their younger sisters fives (in Poland, but in the assemblies of the tank corps and brigades - BT-5 in the riding).

So as from the BT-2 and BT-5 have been on the basis of sevens developed by different design. On the truck bed and the engine of the tank managed to remove the shortcomings of the previous types, so they threw as a platform for special modifications. BT-7A and M has its own section, so I can start the prototype of 1936, which was armed with a machine gun DK 12.7 mm (1 750 rounds) and spřaženými 2x DT 7,62 (2 073 rounds). Since for him there was no fighting the designation has not been adopted.

In the years 1936-37 were the tests and the production of the chemical (plamenometných) variants of the BT-7 (ChBT-7 chimičeskij bystrochodnyj tank).

The removal of the tower and by welding krabicovité of the superstructure, the top closed, with two DT machine guns (in the head and on the side) and one PL of the P-40 was coming in on the roof of the originated in the NATI KBT-7 (komandirskij). In the superstructure there was a place for the two staff officers and one radio operator, which is definitely boredom (I served three machine guns and three of the radio - RTU, 71-TK-1(3) and TASP).

On have been developed bezosádkové called Teletanky with weapons flamethrower, machine gun and zadýmovací device. Reach radiovybavení of the head of the tank should be up to 2 500m.

In the development of tanks BT have been designed and partially tested the main requirements for the tank, which happens to be one of the most famous in the grim episode of mankind, entitled the Second world (the Great patriotic) war. Was tested and dopracován thought out the shape of the armor (with different metallization according to the profile), a chassis with good throughput and the distribution of pressures (system Christie), a powerful, less zápalný and unpretentious engine with little power (V-2). The BT-7A were tested canons L-10 and F-32, whose other series (F-34) with its caliber and performance become universal for the fight against tanks and infantry. The only problémen was weak armor. In the chemical heat treatment were jointly developed as a replacement for the prototypes And the-20 - kolopásový (18 tons, the breastplate of up to 25 mm, mm 45 mm), And a-32 (T-32) with wide belts (19 tonnes, the breastplate of up to 35 mm, canon 45 or 76,2 mm) under the leadership of M.I.Koškina - author of the project T-111 (And.Firstov was in 1938 arrested and shot). Even through resistance "of the second largest tank expert on the world" marshal Kulika managed to commissioner of heavy industry Malyševovi at Least push through the T-32, which, after amplification armour and mounting a gun L11 became the prototype of the T-34, but that's another chapter. 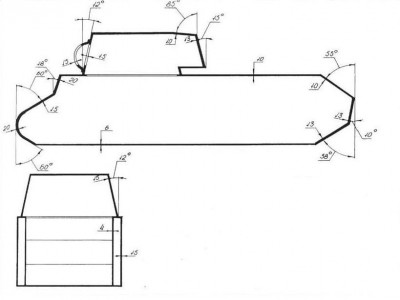 Note that the hub was very dimensional and the wheel otáčelo up in the "spáře" under the six large screws. 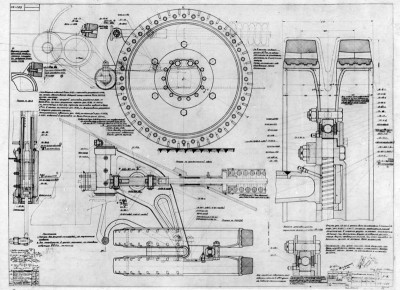 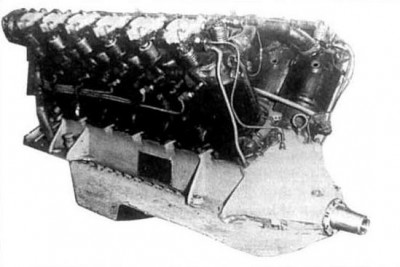 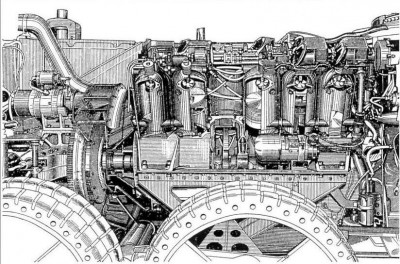 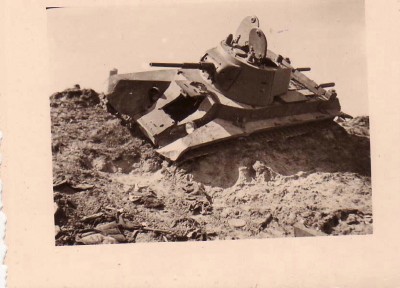 URL : https://www.valka.cz/SOV-BT-7-t6528#249358Version : 0
Dolin404 13 years ago
Photos of abandoned tanks on the eastern front. Unfortunately for the crew of the show photos quite well the internal layout of the tower tank. 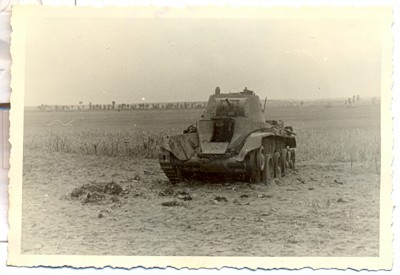 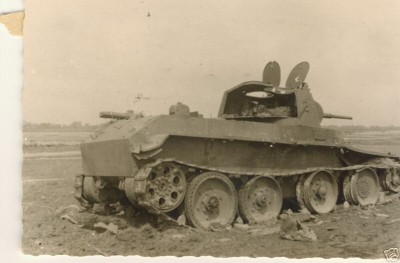 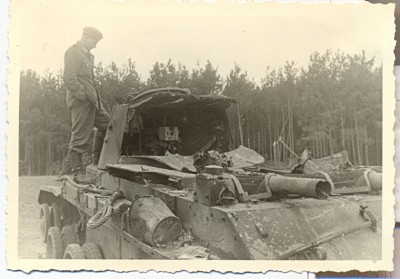 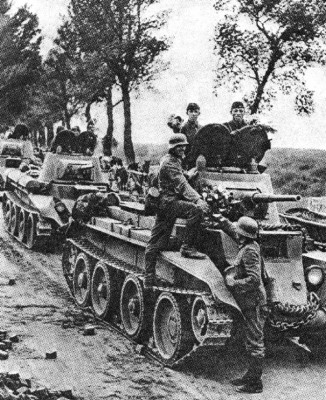 
Source: archive of the author. 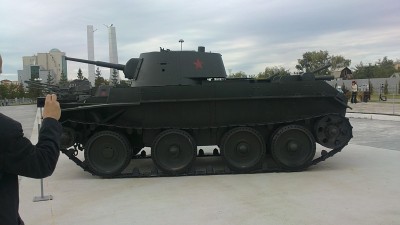 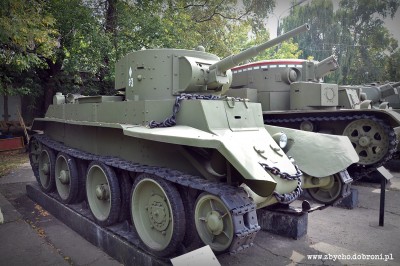 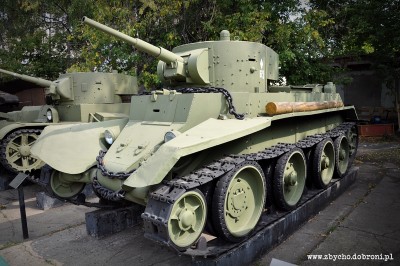 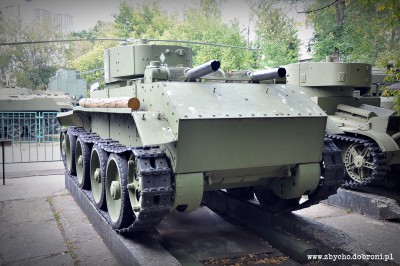 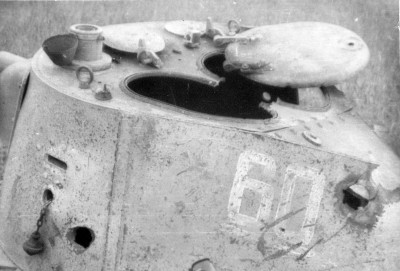