Since 1952, France has produced around 3,400 of these light tanks in various modifications. From the start, it impressed with its low silhouette, small size, powerful gun and high mobility. These characteristics made it widely applicable, not to mention the fact that this tank is easily transportable by aircraft due to its light weight. In the latest variants, it has improved ballistic protection for the hull, a more powerful diesel engine, automatic transmission and hydropneumatic suspension. The original chassis has been modified into various forms such as an infantry vehicle, a 105mm or 155mm self-propelled howitzer or a 30mm self-propelled anti-tank twin-cannon. With the addition of HOT missiles, the AMX 13 tank can be used as an effective anti-tank weapon even 40 years after its inception.

The tank was designed by the Atelier de Construction d'Issy-les-Moulineaux in 1946 based on the requirement for an air transportable tank to directly support paratroopers. The first prototype was produced in 1948, still with the turret of the light American M24 Chafee tank. Production of the tank ran initially at ARE (Atelier de Construction Roanne) from 1952, with the first tanks reaching customers in 1953. In 1964, production was transferred to Creusot-Loire at Chalon-sur-Saone. The last versions went out of production in 1987. The AMX-13 tank has the engine and driver's compartment located in the front of the hull. The small turret is positioned closer to the rear of the hull, with the extended rear turret serving as a counterweight to the higher calibre gun. The driver sits in the left hull and has three periscopes and a hatch opening to the left to provide a view. The commander sits in the left turret and has 8 periscopes and a hatch opening to the rear to provide vision. The gunner has 2 periscopes and an equally separate rear-opening hatch. The torsion bar suspension has 5 rubber-coated running wheels with one traction wheel in the front and one tension wheel in the rear. The tank does not have a WMD protection system and cannot be prepared for deep wading. The tank has additional armour against enemy light guns (prevents penetration of anti-armour ammunition from low calibre rapid-fire guns) This armour is located at the front of the turret and the most vulnerable parts of the hull. Originally the AMX-13 was not designed for night combat, but several armies have equipped it with infrared devices for improved targeting of the enemy at night. Later versions have received passive and active infrared illuminators, laser sights, and electronically controlled firing systems, respectively. The Israeli army developed the EL-OP night-fighting system specifically for this tank.

The first production model of the AMX-13 was armed with a 75mm cannon (this was a gun developed from the 7.5cm KwK 42 L/70 gun of the Panther tank) with a single-action muzzle brake and two automatic revolver loaders, each capable of holding 6 rounds of ammunition. The rate of fire was 1 round per 5 seconds until the magazines were fired. One magazine extended into the turret bore during firing and could be manually loaded from outside the tank, the other was inserted into the gun cap. The gun was capable of firing both anti-tank and HESH ammunition, later also APFSDS. Mounted in the right 7.5mm or 7.62mm MG, often an additional machine gun was mounted on the turret in the commander's hatch area. The tank carried 37 rounds for the 75mm gun and 3,600 rounds (in belts of 200) for the machine guns. Two electrically controlled smoke launchers were mounted on the turret.
This version underwent a number of changes, such as replacing the original SOFAM Model 8Gxb gasoline engine with a diesel unit, and a 7.62mm anti-aircraft machine gun was mounted on the turret. Two later versions received 2 x SS-11 (remotely guided anti-tank missiles located on both sides of the turret) or PTRS 3 x HOT (located in three launchers on the turret walls).

AMX-13/90
The model received the higher calibre 90mm cannon. The rearmament entailed rebuilding the turret and modifying the reloading mechanism.

AMX 13 Bridgelayer
Bridgelayer variant equipped with a Class 2 bridgelayer that is 14.01 meters long. The bridgelayer is lowered through the rear of the tank by the appropriate device, at which time the tank is stabilized by two extendable interceptor stabilizers.

AMX-13 CD Model 55
The AMX 13 ARV is a dismounted variant that also serves as a repair machine when replacing larger parts of tanks in field conditions (e.g. turret replacement, engine replacement, etc.). The ARV is equipped with a crane with a lifting capacity of 15 tonnes. At the end of the hull are placed: additional winch, 4 ploughshares, tools and additional equipment. The ARV has a crew of three. Armament consists of one 7.5mm or 7.62mm machine gun mounted externally on the top of the tank and 2 smoke detectors.

Argentine AMX 13
Most have swapped the original SOFAM Model 8Gxb gasoline engine for a diesel unit.

Ecuadorian AMX 13
New fire control system with laser sight and digital computer that calculates the trajectory of the missile depending on conditions, and a module that improves optics and refines the reticle. A kit is also applied to enable the 105mm gun to fire APFSDS ammunition.

Venezuelan AMX 13
These tanks have 90mm as their main gun. They are fitted with new diesel engines with an improved cooling system. In addition, Venezuela has 25 AMX-13 LAR-160 fitted with an Israeli 160mm Local Acquisition Radar (LAR) instead of a turret, with a corresponding missile launcher. 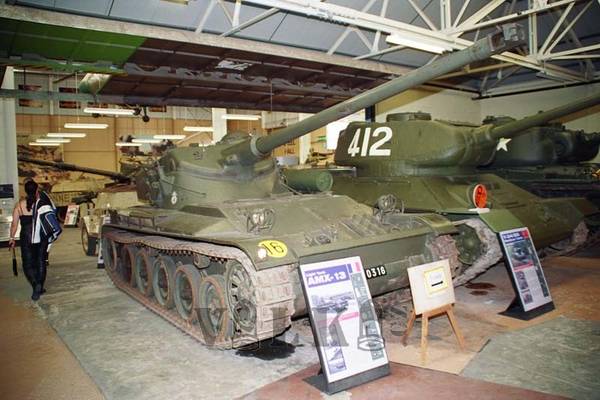 
URL : https://www.valka.cz/AMX-13-prehledove-tema-t547#115441Version : 0
Kubator 17 years ago
An even more interesting hybrid was created, the M4A2 Sherman with the turret from the AMX-13. One machine was captured by the Israelis during the 1967 Six-Day War, and is on display at the Armored Forces Museum in Latrun. Incidentally, the rebuild from a modeler's point of view, along with a couple of photos, is described in Verlinden productions Modeling magazine Vol.4 No.1, September 1992.This is what the Sherman with turret from AMX-13 looks like on display in Latrun.


URL : https://www.valka.cz/AMX-13-prehledove-tema-t547#319173Version : 0
Peetee2212 13 years ago
Peru acceded to the modernisation of their AMX-13 and incurred types, first referred to as the AMX-13 EP but the official marking of the AMX-13PA5 Escorpion and AMX-13PA8 Escorpion-2.
The modernization made in the Diseños Casanave and Peruvian Company.

Tank got a cannon caliber of 105 mm with a barrel length of L/44. Furthermore, it was delivered new ballistic computer, including the fire control system of Ukraine, next to the tower are 4 launchers on the FUSELAGE, 9M14M 2-T Malutka (NATO AT-3 more suitable). And PL machine gun in 12.7 mm. Furthermore, as fuel units are used by either a Detroit Diesel Model 6V-53T or French Baudouin 6F 11 SRY. Thus increased max. speed to 65 km/h.

Source:
Archives of the author.