URL : https://www.valka.cz/Hippel-Hans-Joachim-von-t126219#428198Version : 0
Rad MOD 10 years ago
Anyone who is interested in aviation 1. world war, sooner or later encounter the name of Hans von Hippela. This man, however, neproslul by being a fighter ace, but a noticeable markings of their aircraft.

Hans Joachim Theodor Gottlieb von Hippel was born 12. 9. 1893 in suburban part of Berlin Friedenau as the second child of prussian general conrad of burgundy von Hippel and his wife Else von Hippel.

After the outbreak of the 1. world war ii went to the front with 4. regiment of field artillery and in may 1915 was promoted to lieutenant. In 1916, still more grew the desire for flying and so you filed a request for a transfer to the air force. Request was granted and in November 1916 he reported for Fliegerersatzabteilung (air training unit) and after the successful completion of the training was the beginning of the year 1917 and assigned to the FFA 37, which operated on the eastern front. Here is participated in primarily reconnaissance and bombing missions behind the line of the queue. 30. October 1917 he shot down together with his observer lieutenant Königem behind the Russian lines Nieuport 17. It was his first confirmed victory. He was then sent to the conversion to a single aircraft and 22. December 1917 (according to other data already 20. 12.) was assigned to fighter squadron 5 (Jasta 5). Jasta 5 at the time was on the airfield in Boistrancourt on the western front, in the sector 2. the army and its commander was Oblt. Richard Flashar (2 kills). Squadron operated with the aircraft Albatros D.In.

Right now 22. 12. von Hippel participated in air shows for the emperor, of William II., who was at that time with Jasta 5 on the inspection. The same day also Hans received his pilot badge.

Von Hippel was a member of Jasta 5 well received. Already in training with friends Lt. Paul Bäumerem (44 kills, the Pour le Mérite) in addition, for Hans often went to visit his sister Erna, which is near served as a nurse. Erna with each other often brávala my colleague's and women's company von Hippelovi comrades in arms seem quite thought.

Von Hippel was also an enthusiast in photography - thanks to him today we have dozens of pictures of pilots and aircraft of the Great war, which took both Jasta 5 and later during his service with Jasta 71.

19. January 1918 claimed the von Hippel victory Sopwith Camelu at Vendhuille. In that time and space could go on the Sopwith Camel 54. squadron, piloted by 2nd Lt. F. M. Ohrtem, who fell into captivity. Von Hippel received his second confirmed victory.

In addition to the success stories came also, of course, loss. Unlucky day for Jastu 5 was 17. February 1918. Ltn. Rumey (then 9 kills, total 45, was shot down and his aircraft after an emergency landing was destroyed by fire, Ltn. Schlömer (a total of 4 kills) was in the aerial combat shot in the foot and had to crash-land, von Hippel landed next to him, so that he could provide first aid. During the take-off, however, his engine dropped and von Hippel again fell heavily on the field. From their Kette (swarm) of the four aircraft, only one was returned to the Boistrancourt without incident.


Two days later he had von Hippel, on the contrary happiness, when in aerial combat "with three or four Sopwithy" at an altitude of over 4 000 metres, lost the left bottom of the load-bearing area of his Albatros D.In (piloted by the then machine Oblt. Flashara with serial number D.2065/17 - the famous red dragon). Thanks to the delicate piloting to him finally after 15minutovém descent managed his badly damaged machine to sit down on the ground, and although the machine overturned, von Hippel escaped unhurt.

Hippel himself described this experience as follows: "18. February 1918 Jasta 5 to go and very vrzy was at a height of 5 000 m in aerial combat with the English machine. I flew the biplane Albatros D.In and carried out the swoop-years of about 1 000 m below. If I wanted a machine to compare, I felt a short trhnutí and saw how the bottom of the left bearing surface ripped off from the hull. The stiffening wires are also utrhly and the wing departed. The machine, which was now heavy on the right side, threatened to fall into a tailspin. With the appropriate correction of the elevators I managed to maintain it in a horizontal position. I had removed the engine and the ignition and could not turn. The flat glide I succeeded with a piece of land, he then capsized midway, because when the landing procedure no longer worked. I wish I had Heineckeho a parachute, at a height of 4 000 m I would, without reluctance, jumped out. The wing of the one man from the home guard found 20 km from the landing site and brought as a souvenir. It was completely intact. What a feeling I had during this čtvrthodiny, you probably domyslíte. This episode has become over the Le Catelet."

In march began the German spring offensive. Aircraft all of the available units participated in the hard aerial battles, which dragged on until the following month.

And then came the tragic 21. April 1918. That day was in aerial combat lost Manfred von Richthofen, the most successful German tank. Jasta 5 was near his last fight above the valley of the river Somme. Although, in this fight nenárokovali the pilots of Jasta 5 no victories nor suffer any losses occurred between them and the English planes for a tough fight. Ltn. Mai (then 9 kills, at the end of the war 30) estimated that the battle took part in 150-160 aircraft. Although this number is certainly inflated, it is nevertheless true, that the event was intense and a Kette of Jasta 5, fight participated. Write in the diary of the squadron just laconically notes that the Kette has started in at 11.09 am and returned at 12.45 pm after a heavy fight over the Corbie. Hans von Hippel, flying on that day on the Two 6530/17 on his 81. fighting years, he was one of the distant witnesses Richthofenova the fall and wrote into his diary: "we have Observed Manfred von Richthofen in his red trojplošníku in the fight behind enemy lines. Richthofen, apparently due to engine failure, landed inside the enemy lines and according to our observation, was not attacked or shot down."

It is interesting that the German testimony to the fact that Richthofen led his machine to a successful emergency landing is more - it is perhaps possible that actually landed, and eventually was shot up on the ground přibíhajícími australian soldiers? Discussion on von Richthofenově death is just as passionate as nevyřešitelná. In any case, the loss of the most capable of the German air commander and the most glorified war heroes was for the Luftstreitkrafte a terrible blow. Richthofen was truly irreplaceable.

In may, 1918, also a member of Jasta 5 přezbrojila on trojplošníky Fokker Dr. I. Von Hippel with them however much didn't, because the already 18. June was sent to the Idflieg (Inspektorat der Flieger - Inspectorate of the air force), where he worked in the training of recruits and there was on 15. August 1918 von Hippel transferred to Jasta 71 as its technical officer. Jasta 71 housed in the Habsheimu on the southern section of the front of army group B. The unit was commanded by Lt. Herman Stutz (6 kills). Jasta 71 operated against the French air force and has achieved since its inception January 1918-five kills in three of its own losses. Also von Hippel tried to improve the scores of their new units, but until the conclusion of the armistice in November 1918 no confirmed success availed. Reported, while the victory of the Fallout 13 22. August and 27. October, 1918, but this victory remained unconfirmed. Von Hippel received the Iron cross 1. class and he was bestowed Hanseatic cross the city of Bremen.

After the war, remained von Hippel still some time in the army, but later became a successful air akrobatem. In 1926, for example, podletěl Hohenzollernský bridge in Cologne. In the years 1927-1935 he flew as a transport pilot for Lufthansa, and in 1936 entered the Luftwaffe, where he flew with transport Junkersy Ju 52. In 1945 he achieved the rank of lieutenant colonel.

Hans Joachim von Hippel died 6. August 1975 at the age of 82 years in Boppardu on the Rhine. 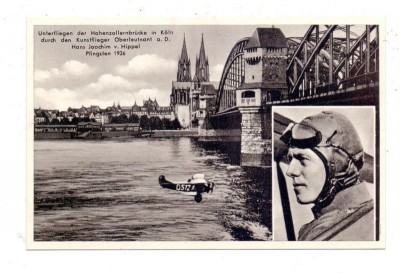 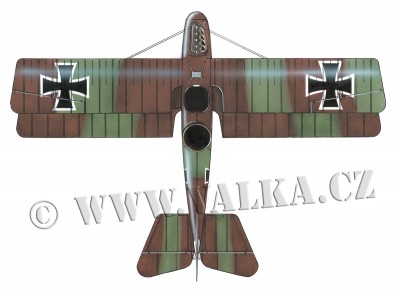