URL CZ: https://www.valka.cz/Manteuffel-Hasso-von-t14666#400975Verze : 0
URL EN: https://www.armedconflicts.com/general-tankovych-jednotek-t14666#400975Version : 0
Radoslav Turik MOD 10 years ago
URL CZ: https://www.valka.cz/Manteuffel-Hasso-von-t14666#422076Verze : 0
URL EN: https://www.armedconflicts.com/general-tankovych-jednotek-t14666#422076Version : 0
Radoslav Turik MOD 9 years ago
Hasso Eccard von Manteuffel was born 14. January 1897 in Potsdam. His father was a guards centurion Eccard von Manteuffel, and his mother Susanne Ende. Grandparents on my father's side were colonel Karl von Manteuffel and his wife Luise von Ravenstein. Grandparents on my mother's side were the architect, the secret government and the construction of the tada, professor and president of the Academy of fine arts in Berlin Hermann Ende and his wife Auguste Dickmann-Becker. His father died in 1904. From the year 1908 was his step father major Otto von Stockhausen. Due to this the prussian military background so it is not surprising that Hasso von Manteuffel took in 1908 to the Royal prussian kadetnímu corps, under which he studied at the kadetce in the Naumburku and the main kadetce in berlin Lichterfelde. In February 1916 he joined as an ensign to the Husarskému regiment von Zietenově (brandeburskému) no. 3 in Rathenowě. Here was in April of the same year appointed to the rank of lieutenant and deployed to the western front, where he was to fall badly wounded. After recovery he served on the staff of the infantry division. during the war he was awarded the iron cross and other decorations.

After the first world war served this great horseman and swordsman, first from January 1919 as adjutant in the Volunteer corps Burgharda von Oven in Berlin. From may 1919 he served in the Cavalry regiment 18, and then after further reorganizations at the 3. (prussian) cavalry regiment, specifically for its 2. eskadrony. In June 1921 he married Armgard von Kleist, the niece of Ewald von Kleist. Together they had two children. At the end of the year 1924 became the regimental adjutant, and in April of the following year he was promoted to lieutenant commander. In the regiment took over in 1929 as commander of the commander of the 2. eskadrony, first in Rathenowě and then in Bamberg. In 1934 he was promoted to the rank of rytmistra, it has already served in the Cavalry regiment 17. During expansion of the army was his eskadrona in the autumn of 1934 translated to II. půlpluku Cavalry regiment Erfurt in Eisenach. 15. October 1935 the unit was renamed the Motocyklistický battalion 2. Manteuffel since fully switched from horses to mechanization. In October 1936 he was promoted to major and in 1938 became the officer for the motorization of ground forces to the Main headquarters of the ground troops (OKH). In 1939 he became a teacher at the panzer school at Krampnitz, where he was in April 1939 promoted to lieutenant colonel. The teacher remained even after the assault of Poland and in the fighting joined up during the war with France.

13. June 1940 to 5. October 1940 he commanded the Motocyklistickému battalion 3. In may 1941 he became commander of the I. battalion of the Rifle regiment 7, with which it participated in the battles against the USSR. In August 1941 he was appointed commander of the Rifle regiment 6. In October 1941 he was promoted to the rank of colonel, and in December he was awarded the knight's cross. From July 1942 he commanded until November of the same year, 7. brigade panzer grenadiers, then was transferred to the führer's backup. To the end of the year he was transferred to north Africa, where in February he took over the command of the division, which bore his name. In Tunisia, where he managed in their area significantly slow down the allied advance, was so seriously injured that he had to be in April 1943 odtransportován to Germany, where he was in may appointed to the rank of major general. After his recovery he took over in August as commander of 7. panzer division, which was located on the eastern front. Here he led in the battles of the Belgorod, Charkiv and on the Dnieper, where he managed to block the soviet offensive. In November 1943 proved once again to conquer the Zhytomyr, thus of the encirclement saved 8. the tank division. For this achievement he received the oak leaves. In February 1944 he was promoted to lieutenant general and appointed commander of Division panzer grenadier Großdeutschland, which led in defensive battles west of the Dnieper, for example, in the battle of Korosten. After the division in march moved to Romania, where in June, successfully led another defensive struggle. In July the division moved to East Prussia, which was threatened after the soviet operation Bagration. Manteuffel led the division during the counterattack on the territory of today's Lithuania. This action may zastabilizovala the front, but the Germans when it had quite high losses and, moreover, failed to break through the encirclement of army Group North in Courland. In September 1944 he was promoted to general of the tank units and appointed the commander of the 5. tank army, with which he participated in heavy fighting with Patton's 3rd. army in Lorraine. After the army was withdrawn to the reserve and prepared for the battle of the Bulge. That ended in German defeat, but Manteuffel could at least lead a large part of its troops back from the impending encirclement. In march 1945 he was a recent holder of the knight's cross with oak leaf cluster, swords and diamonds transfer to the eastern front to Pomořan, where he took over 3. tank army. With that he had the south-east of Berlin to defend the line of the Oder. The task was impossible and Manteuffel, after hard fighting he withdrew with a large part of the units in the Elbe into british captivity. The british held him in various detention camps in Britain and then turned him over to the Americans, who in 1947 was released.

After his release Manteuffel first worked in Neuss in the bank, which belonged to Robert Pferdmengesovi. Soon he ventured into politics, in 1949 joined the Free democratic party (FDP) and became an expert in the military field. According to the information of the british secret service to become a member of the Brotherhood, a right-wing nationalist groups, in which she worked a number of former nazis. Alone Manteuffel membership has always denied. However, it is known that the German military resistance labeled as a traitor in the rear, advocated for the release of a number of war criminals and defending blind obedience to the leaders. Those were probably the reasons why he wasn't invited to participate in the activities of the Dienststelle Blank, which prepared the emergence of the armed forces of West Germany, and why then was reactivated by the officer's condition. Between 1953 and 1956 he was a member of the federal bundestag for the Svobonou democratic party and partisan speaker in the field of defence policy. Advocating for German participation in NATO and even thanks to him, are the German armed forces named as Bundeswehr. In 1956 the FDP abandoned due to the entry of the parties into a coalition with the social democratic party in North Rhine-Westphalia and participated in the founding of the Free people's party (FVP). In it he served as deputy head of the parliamentary faction. When the party in the following year merged with the German side, went Manteuffel. In 1957 he was accused of machinations around the arms procurement, nothing but did not appear.

Although the Allies were not charged with war crimes, appeared in 1959 before the court for an act which occurred during the war. It was a killing that should happen by, that in 1944 he sent before a military court with the accusation of cowardice before the enemy soldier, who during the night patrols watched as two of his comrades in arms carried about. Not only intervened, but even that didn't report. Court-martial of a soldier sent into the prison, but this wasn't Manteuffel satisfied and the soldier left with reference to the fuhrer's orders to shoot. Court him for it sent for a year and a half in prison. However, the judgment had a variety of opponents, who argued that a similar approach was common in other armies. Finally achieved thanks to the pressure of the federal president Theodor Heuss that Manteuffel was shortly after the onset of the jail released. In 1968 he lectured at the u.s. Military academy at West Point about leadership fight in the winter conditions, which allow the experience gained and the ability to speak fluent English. During this stay he met in the White time with Eisenhower. In the U.S. he also worked as a consultant in the filming of movies with a war theme. Hasso von Manteuffel died 24. September 1978 on vacation in the austrian Reith im Alpbachtal. 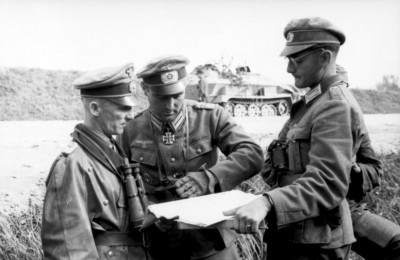 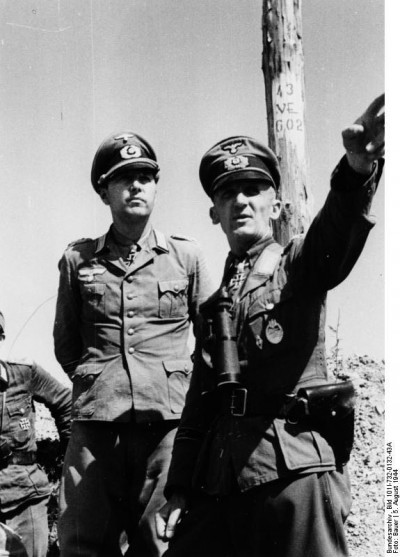