URL : https://www.valka.cz/BB-USS-Arizona-BB-39-t7634#555689Version : 0
Admin MOD 5 years ago
Construction ship
The keel of the battleship Arizona was founded 16. march 1914 at the new york navy shipyard. On the water the ship was launched 19. June 1915. The baptism took miss Esther Ross, the daughter of a prominent citizen of arizona Prescott. The service has been Arizona listed 17. October 1916. The first commander was a navy captain John D. McDonald's. Departed New York 16. November of the same year in the stress test at the mouth of the Chesapeakské bay. From here out on the Guantanamo. In exactly a month came back to Norfolk, to then tested their guns, and tried on defense against torpedoes in Tangier're at chesapeake bay. Before christmas she returned to the neworské repair yards nedostatké, which were revealed during stress tests. Yard left 3. April, 1917 and went to Norfolk where the next day was incorporated into the Division of battleships 8.

Participation in the first world war
After the entry of the USA into the first world war served Arizona as a vessel for the training of shooters and from the base in Norfolk was guarding the pobřěžní water between Norfolk and New York. To the Uk has not been sent and therefore that it was driven by fuel oil, which was on the islands the lack of. Shortly after the conclusion of the truce knocked Arizona out of Hampton Roads into the English of Portland, which arrived on 30. November 1918. Away then went the meeting with the ship George Washington which was carrying president Wilson to the peace conference in Paris. Arizona was then part of the honorary escort to the port in the Brest into which the convoy arrived 13. December 1918. The vessel loaded the 238 war veterans and sailed with them the next day to New York. To him arrived on christmas day and the following day defilovala before the secretary of the navy, who was on a yacht near the statue of Liberty. Then drove into new york harbor, where her greeting enthusiastic crowds of onlookers. 22. January 1919 sailed to Norfolk.

Travel the world
Arizona along with dašlími vessels surged 4. February 1919 at the Guantanamo. After four days there, arrived and participated in there maneuvers. 17. march went to Trinidad, which has reached after five days and three days in tamnějším port for a while. 29. march for a moment she came back to Guantanamo, because it's already 9. April went out on the way back to Norfolk. 12. April has arrived into its home port, but on the same day embarked on the road to Brest, france. It reached 21. April and abstained from the 3. may. Then set sail towards Asia minor. After eight days landed in the port of in the Smyrna. The greeks at that time this part of Asia minor was occupied by the and Arizona to provide protection for american citizens, part of which the board has found temporary refuge. A detachment of the marine corps, meanwhile, landed and guarded the american consulate. On board the vessel remain for some time even Greek nationalists. 9. June, the Arizona sailed to Konstantinople with the american consul Morris on board. 15. June from there went to New York, which has reached 30. June. Here passed in the shipyards of the navy maintenance and 6. January 1920 to join battleship division 7, which surged in the winter and spring maneuvers in the Caribbean sea. Arizona operated from a base on the Guantanamo and, inter alia, included a visit to Bridgetown, Barbados and panamkého Colónu. 1. in may 1920 she came back to New York. After seventeen days from here out for exercise to the mouth of the Chesapeakské bay. After its completion, came to Norfolk and Annapolis. To New York back 25. June and for a further period of six months was operating in his neighborhood. 17. July 1920, received codename BB-39. 23. August, Arizona became flagship of the division commander battleships rear admiral Edward W. Eberle. 4. January 1921 set out from New York and went on Guantanamo and then to the panama průplavového zone. 19. January arrived Arizona in the Colónu, ran a canal, and continued into the peruvian Callaa, where docked 31. January on a six-day visit, during which the ship visited the peruvian president. 26. February I was back on the Guantanamo, where she remained until 24. April 1921. Then released through Norfolk to New York, where she landed 29. April. Up to 15. June here was going through repairs and modifications.

Travel to South America and modernization
Then went to the mouth of the Chesapeakské bay, where from her decks stood by the army and naval observers of the experimental bombing of the former German submarine U-117. Then she returned back to New York. Here 1. July became the flagship of rear admiral John Mcdonald, who was once her first captain. 9. July Arizona went to Panama and Peru. 22. July arrived in Callaa at the forefront of the Battle groups of the Atlantic flot here to watch the celebration of one hundred years of peruvian independence. 27. July, vice admiral McDonald attended the unveiling of a monument to the memory of José de San Martín, who is considered the liberator of Peru from Spanish rule. 3. August is Arizona went on a journey back to the north. In Panama in August, became the flagship division of battleships 7, while McDonald transferred his flag to on the battleship Wyoming. On Arizona now flew the flag of rear admiral Josiah S. Mckean. From Panama the ship went to San Diego, which came in 21st. August 1921. For a further period of fourteen years was Arizona, alternately, the flagship division of battleships, 2, 3 and 4. The base was in San Pedro, and operated off the coast of southern California and in the Caribbean sea during the different exercises. Regularly at various locations from Hawaii to the Caribbean participated in annual closing exercise (the so-called Fleet Problems). After returning from the exercise, Fleet Problem IX in January 1929, the Arizona shifted Guantanamo, where she stayed until April. Then 4. may moved to a shipyard in Norfolk, where after a period of twenty months took place its modernization. The old lattice masts were replaced by trojnožkovými, the existing anti-aircraft guns were replaced by more modern, it was improved panceéřování and the ship got protitorpédovou plating. Arizona also got a new boiler and turbine.

Service in San Pedro
In the service of the Arizona back 1. march, 1931. 19. march of the same year aboard aboard president Herbert Hoover and set off with her to puerto Rico and the Virgin islands. 29. in march she returned to Norfolk, landed the president and sailed north to Rockland, Maine, where passed the certifying tests. Arizona is then released through the Boston and Norfolk on the base in San Pedro. Here has become the flagship of a division of battleships 3 within the Battlefield of the union. After a few more years with her classification changed to, and regularly participated in annual closing exercise. This took place in areas from Alaska to the Caribbean. 17. September 1938, Arizona became the flagship division of battleships 1, commanded by rear admiral Chester Nimitz. In may 1939 it was replaced by rear admiral Russell Willson.

Preparing for war
After the final exercise with the serial number XXI Arizona operated in the vicinity of Hawaii, with had a base in Pearl Harbor. When it was over the summer of 1940, she came back at the end of September in Long Beach. Here oplula to the shipyards in Bremertonu, where it has undergone repairs. 23. January 1941 he replaced rear admiral Willsona at the head of the division kontradmnirál Isaac C.... Kidd. 3. February, 1941, the Arizona returned to Pearl Harbor and engaged in a great exercise Pacific flot. At the turn of June and July for a moment drifted away to Long Beach, then again in the vicinity of Hawaii engaged in a carousel of training and exercise. In Pearl Harbor, has undergone minor refurbishments, and then opěti involved in the exercise. The last were the night fire in the night 4. December 1941, which took place together with Nevada and Oklahoma. 5. December all three of the battleships docked at a pier at Ford island. Arizona stood at berth F-7.

Attack on Pearl Harbor
Arizona had to go through scheduled maintenance, and therefore was on her side 6. December tethered repair ship Vestal. On the Arizona 7. December morning were rear admiral Kidd, commander of the ship of naval captain Franklin van Valkenburgh and the officer of the marine corps division, lieutenant colonel Daniel Fox. Shortly before eight o'clock in the morning attack on Pearl Harbor japanese planes. Sirens at Arizona resounded in 7:55. The ship shortly after she suffered several hits with bombs and toprédy. Osmisetkilová bomb from the aircraft Nakajima B5N2 piloted by korvetním captain Kasumi Tadašim from the aircraft carrier Hirjú broke through the deck and landed in the warehouse of gunpowder. A huge explosion tore the bow of the ship. Other interventions then caused other minor damage. Together it was about so much damage that the ship sank, without being turned over. The highest-ranking officer surviving the blast was lieutenant commander Samuel Fuqua, who started immediately with a calm head to manage the rescue work. For their bravery he was subsequently awarded the Medal of honor. The division commander Kidd or captain of the ship Valkenburgh, who after the first intervention arrived on the bridge and tried to control the combat operations, were posthumously awarded the same honors. About life this morning on the Arizona came 1 177 men from 1 to 512 on board.

Monument
Arizona was 29. December 1941 formally transferred to the backup and 1. December 1942 stricken from the naval registry. The superstructure, which overlapping above the surface was cut off and the tower with cannons were placed on the shore as a coastal gun. The wreck of the ship remains in place and has become a national shrine and memorial to a man who, during the japanese attack were killed. 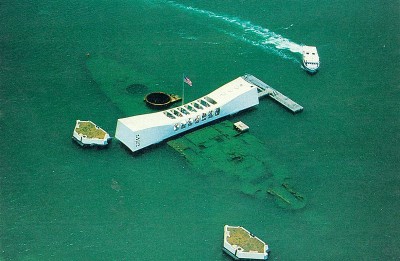 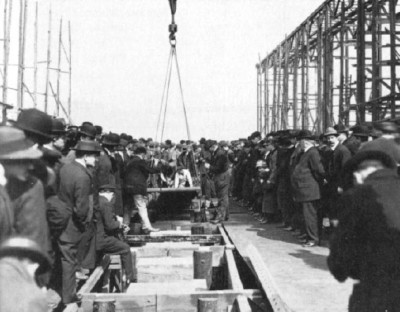 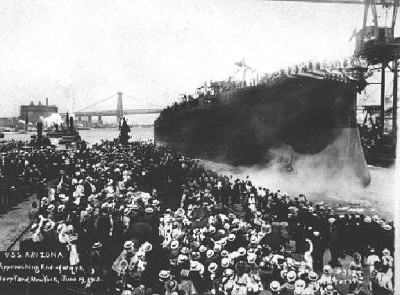 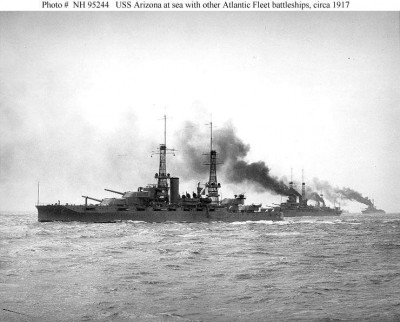 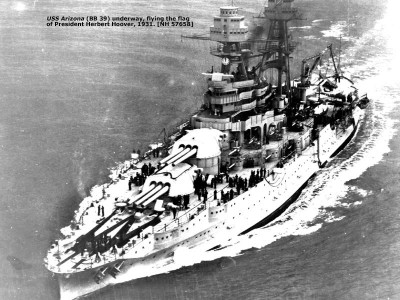 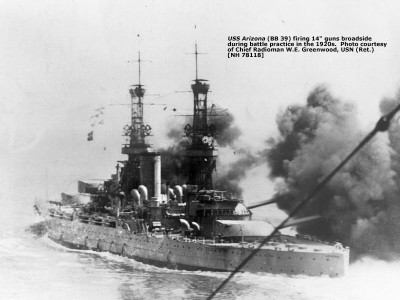 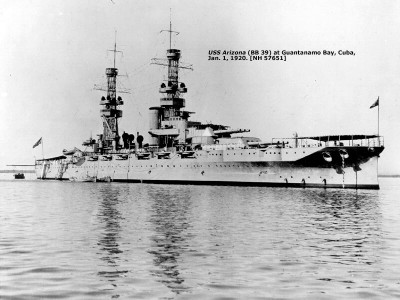 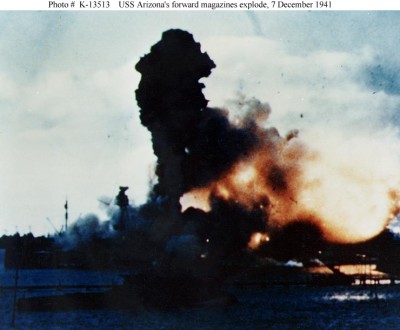 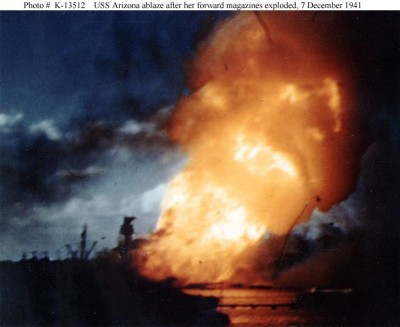 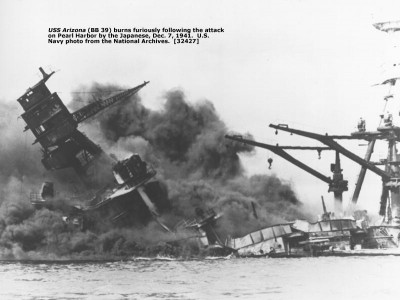 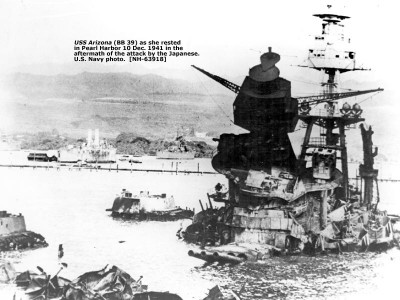 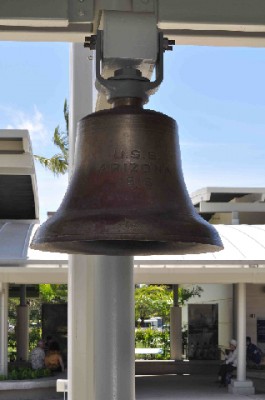