He was born on February 26, 1893 in Landshut, Bavaria. From a young age, he was passionate about mountaineering. He studied French language and literature at the University of Grenoble and then received his technical education in Munich. After graduating, he began working at the Otto aircraft factory in Munich, dealing with aircraft design.

After the outbreak of war, he volunteered for the Air Force and underwent pilot training. In January 1915 he was assigned to the Feldfliegerabteilung Nr.8 b (FFA 8 b), where he suffered severe injuries on March 21 during an air battle from which he recovered for two months.

In July he was transferred to Feldfliegerabteilung Nr.9 b (FFA 9 b) to Tyrol. The unit was based at the airport south of Brixen, commanded by Franz Hailer and was equipped with aircraft Pfalz Parasol and LVG B.I. She later moved to Toblach Airport.

During this period, a raid was planned on the position and warehouses of Italian troops around Cortina d'Ampezzo. For these bombing purposes, Pfalz aircraft were equipped on each side of the fuselage with a temporary carrier for five bombs weighing 5 kg and their fuselages and the underside of the wings were painted wide white-red stripes.

Due to the heavy load and demanding flight of the Alps, the aircraft flew on this mission on July 31 only with a pilot without an observer. One of the three selected aircraft was also flown by Kissenberth. After the unit returned to France, he was promoted to the rank of Offizierstellvertreter on August 27, 1915. Another promotion to the rank of lieutenant followed on November 11.

After being awarded the Iron Cross Class I on January 10, 1916, he was selected for service in the fighter unit KEK Ensisheim, where he flew on fighters Fokker D.II, Pfalz EI and Pfalz E.II.

He scored his first and triple victory on October 12, 1916, when in his Fokker D.II 540/16 he took off against English and French bombers that raided the Mauser factory. v Oberndorf. He managed to shoot down two French aircraft Farman F.42 and after a new refueling and ammunition, he won over the English aircraft Bréguet V, whose crew was captured.

As of November 1, KEK E has been transformed into Jagdstaffel 16. Otto Kissenberth waited for his next victory until the summer of 1917. He first shot down a SPAD aircraft near Somme-Py on May 26, and then fired a balloon near Aubreville on June 19. Jasta 16[/url] won his last victory while at shortly after noon on July 16, when he shot down an aircraft near Morte Homme [url=/topic/view/7631] SPAD VII.

During this period he flew on the machine Albatros D.V, which had a black fuselage and on it on the side behind the cockpit white-yellow eelgrass flower.

On August 4, 1917, he was appointed commander of Jasta 23. Here again he flew on the machine Albatros D.V (D.2263/17), which had a black fuselage and on it on the side behind the cockpit white-yellow eelgrass flower.

In August, he scored a total of six victories, bringing his name to twelve. In September, another five victorious air battles followed, and in 1917, eighteen recognized victories ended.

He scored his first victory in 1918 on January 25 by shooting down a SPAD aircraft near Verdun. During May 1918, Jasta 23b was rearmed with aircraft Roland D.VIa numbers D.1200/18 to D. 1219/18. Otto Kissenberth won his last 20th victory in a somewhat unconventional way, flying a Sopwith Camel loot on May 16 and shooting down a Royal Aircraft Factory S.E.5a[/url] near Tilly-Neuville.

However, the Sopwith Camel plane was fatal when it crashed with it on the evening of May 29, probably due to an engine failure, near the airport in Epinoy.

His injuries no longer allowed him to return to active duty on the front line. He was awarded the Pour le Mérite on June 30, 1918. On August 19, he was promoted to the rank of Oberleutnant.

Otto Kissenberth was one of the few pilots who flew with prescription glasses. After a partial convalescence, he was appointed commanding officer in the Fliegerbeobachter-Schule Schleißheim, where he served until the end of the war.

Otto Kissenberth died tragically during a climbing ascent in the Alps on August 2, 1919. 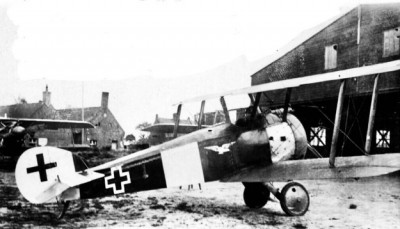